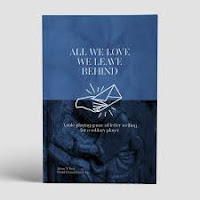 In this game, you play as the one who has been left behind. Someone close to you--your spouse, lover, sibling, child, or best friend--has left. Generally, they’ve gone off to be an “adventurer” of some sort; what would typically be a PC in other games. You are the one left at home, hoping for their safe return, and dreading the worst. So you write them, as often as you can, trying to keep your connection alive. But they never reply, and you are left to struggle with their absence. As you play, cards from a typical deck are drawn to reveal what happens to you during while they are gone, and how you cope without them in your life. If things go well, you are finally able to put them in your past and move on. If not, the feelings of abandonment and isolation may prove too much for you.

So, yeah, it’s a pretty different beast than what I’m used to, so this is going to be a bit of a rough experiment. I’ve never done anything like this, and it’s quite possible I might trip up and do a few things wrong here and there. But, that is all part of the fun. I’m also pretty sure there will be at least two differences from this play through and what the game presents.

The first way I’m going to diverge from Vass’s instructions is in the actual writing of the letters. He instructs you to actually, physically, write the letters out, to better experience what the character is feeling in the moment. I’m pretty sure he’s correct about this, but for this series I will, naturally, be typing these letters. This might deny me the pleasures that come from physically creating something, but it ensures that others don’t need to deal with my atrocious handwriting.

Secondly, I don’t know what genre I’m going to use. The base AWLWLB game assumes a fairly typical fantasy scenario, though the game also includes “hacks” for alternate settings--noir, summer camp, and distant sci-fi. I have no particular idea of when or where I want the game to take place, so I’m going to decide randomly.

First, general time frame. Is this:

1. The past (includes fantasy, but also historical era’s prior to 1900)

I'll be honest, this was not quite was I was expecting when I started this post. But, play the dice where they lay, as they say. Next post I’ll create my character, The Writer, and their focus, The Absent.