The game itself is something of a creative writing exercise in many ways. You create your character, as well as the circumstances which lead to your embrace as a vampire. After that, you use dice to determine what events befall your character over time, how these impact your character, and what you lose and gain as time goes by. Memories are the most important element. As the years pass, certain things are forgotten, while others remain fresh. If you are in danger of losing a Memory you can attempt to preserve them in a Diary – a physical item in which you document what has happened, though you no longer truly remember the events and simply trust that you recorded them correctly. Of course, being a physical object, a Diary is at risk of being lost, or destroyed. You also have Skills (things you have or could do), Experiences (individual events which, when combined, form Memories), Resources, Characters (others who are part of your story), and Marks (unique physical characteristics).
That is pretty much it; though more will, naturally, arise during play. So, let’s get started. To begin with,  I need to know who my character is, what his mortal life is like, and what it is that he wants. I don’t have anything in particular in mind, so I turn to Universal NPC Emulator for assistance. Rolling on that, I come up with:


Defective Thug who cares about Manage Lies, Relate the Government, and Interact Zeal.

I’ve been on a bit of a Roman history kick lately, and my first thought is that this guy is a Roman political streetfighter. Not a Patrician or a Senator, but someone who leads one of the various mobs battling for control in the late Republic. I decide to give him the name Lucius Casius, just because I think it sounds cool. 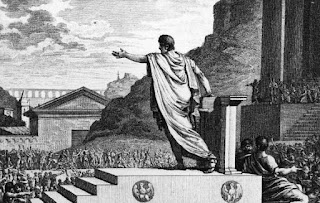 So, he is Lucius Casius, b 92 BC in Campua, Roman politician seeking status and glory.
Next, he needs three Characters who are tied to him in some way. I decide on the following:
·         Manius Aemilius Lepidus Patrician and Patron to Lucius
·         Aurelia Lepida Daughter of Manius, married to another man, but Lucius’s mistress
·         Marcus Varro Rough and tumble ex—Centurion and close friend
Now, I need to create three Skills for Lucius. Based on what I know of him, I go with:
·         Oration
·         Seduction
·         Street Fighting
Next, he starts off with three Resources. These are inherently vague in the game, as they can vary greatly based on the character. One character might have an army, while another a dagger. Both are Resources.
·         Street Mob
·         Domus (he’s done well for himself, though he wants a better address. And a villa would be nice)
·         Concealed Gladius (no one should have weapons inside the city, but these are dangerous times).
Finally, I need to combine all of what I know of the character to create three Memories of his mortal life.
·         Marcus and I running through the streets as reckless youths, losing ourselves to wine and woman
·         Holding my mother’s hand as she dies, urging me to do good and to make the family proud.
·         Having fled from Aurelia’s bed moments before her husband returned, I looked back at her domus on the Capitoline hill and realize how much I love her; bitterness nearly overwhelms me as I realize that, no matter how useful I was, I would never be worthy of marrying her.
Now I move onto the one who turned Lucius into a vampire. For no particular reason, I decide that his creator is an ancient Greek vampire who has existed at the center of a cult dedicated to the Erinyes (Furies) who recently moved to Rome after the conquest of her homeland.
Semnai, an ancient Greek, who masquerades as a goddess. My Experience with her is I foolishly rallied the people against the “degeneracy of the Greeks” and attracted her wrath.  That night, she visited me in my domus for both vengeance and to gain a useful servant. Going a bit off of Greek and Roman myth of bloodsuckers, the Strix I decide my Mark is Talon-like hands, permanently marking me as something other than human. I conceal them beneath my toga, lest any see them.

And with that, we are ready to proceed. Beneath is the “character sheet” I’ll be using for this game, and the story begins here. 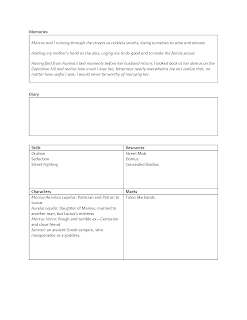