I add “sacred cave” to my list of resources and roll for my next prompt. This time I get a 3 and a 5, which works out to a -2. I can’t go back further than 1, so I head back to that event and work with the second prompt listed.

You are overcome by blood frenzy and maul someone close to you, accidentally turning them into a vampire. Convert a beloved Mortal into an enemy Immortal Character. Take the Skill “Guilty”.

Which leads me to:

I cannot escape her. Every night I walk by her domus, and I hear her weeping. For her father? For me? I am still drawn to her. I am overcome with sadness for her, and I creep into her chambers, to comfort her. She is frightened by my arrival, and when I reach out with my hands, she screams. I had forgotten the grotesque mockeries they are now and I grasp her to calm her, to silence her. Enraged, I bite. But do not kill. Instead, she is cursed, as I am cursed. She knows what I am, and understands what happened to her father. And she will never weep for me again.

I decide that this as good a place as any, and decide to wrap all these Experiences up into a new Memory.

On my first night, I was overcome with the blood frenzy and slew the man who had been as a father to me. Overcome with guilt, I tried to hide away in a sacred cave, but my loved for Aurelia drew me out, and to her damnation as I turned her into a creature like me. An act she will never forgive.

I imagine some sort of time skip is appropriate here, but let’s first see what the next prompt is. I roll and get a 6 and 3, for a total of 3. Adding this to my current count of 1, I am brought to prompt 4.

You are exposed and flee to a neighboring region. Lose any stationary Resources. Check a Skill. A Mortal flees with you.

DAMN IT! I never even got to use most of my Resources. One could argue that the “mob” isn’t stationary, but I really saw them as Roman citizens, so I don’t think they can come with me. I delete everything save my gladius. Of course, my good friend Marcus accompanies me.

Aurelia’s vengeance came swift, calling me out as the murdered of her father. It is only with the aid of Marcus that I escape the city. My city. We flee across the Adriatic to Greece, origin of my creator. Perhaps here I can find answers to my new condition.

This felt like a logical follow up to my last prompt, so I decided to keep the time-frame roughly the same. Rolling for my next prompt, I get a 7 and a 1, for 6. I add this to my current, and end up at prompt 10.

The stars pinwheel above you in the night. You are unconscious of the passage of decades, you are as an automaton. Strike out a Memory. Strike out all Mortal Characters.

Alas, poor Marcus. You were a true friend and a true companion. You will be missed. 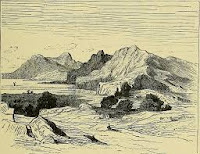 I find no answers in the dark corners of Greece, and I soon lose even the desire to question, consumed as I am with guilt. Marcus joins me, for a while, until one night I realize that he is no longer with me. Did he leave me? Did he die of old age? I remember his name, but I can no longer recall what he looked like, nor why this should be bother me so.

I combine these two to create a new memory.

Aurelia’s vengeance came swift to me, and I fled across the Adriatic to Greece alone; I lose myself in the wilds to the north of these lands, finding nothing and needing no one.

Marcus really deserved better.  Like, legitimately, this bothers me. I know Marcus has been a non-entity for most of this, but just the thought of a loyal and true friend who gives everything to someone, and is then just…forgotten. Not even honored or in any way appreciated for his sacrifice. This game is starting to upset me (though this is a good thing), and I think I need to take a break here.

Here’s the updated character sheet. See you guys next time. 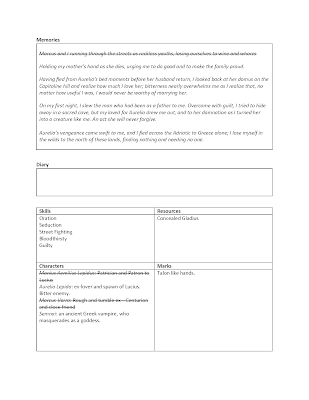