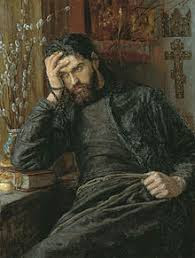 You commit a murder, but not to feed. Why? Check a Skill. Remove a Mortal Character, if you like.

I don’t want to kill Pelias, not after we’ve finally found each other. Instead, it makes the most sense that Lucius would commit the murder of Pelias’ behalf. I decide that Lucius is actually acting out of Guilt for his previous acts of violence.

They called him ‘heretic’ because he refused to bow to their inane drivel. They sought to kill him, the kindest and gentlest soul I had ever met. I could not stand for this, not after what had happened to Manius and Aurelia. My nature led to their deaths, but maybe I could find some of the salvation Pelias spoke of by saving him.

Your feeding techniques are no longer effective. What has changed? Lose a Resource and create a Skill.

This actually follows from the previous events. With the rise of the Christians, the “wondering around and feeding as I please” is no longer an option. Instead, I need to learn to blend in with the world. I create a new skill Masquerade to show my ability to act like a human in this new, Christian Empire.

The old ways have past, I see it now. I must lean on Pelias, to teach me how to survive in this new world. I give up my wonderings and settle in this New Rome, Constantinople, passing myself off as an eccentric if harmless scholar.

Two things. First off, this feels like a good time for a new Memory. I also think that this is a good time for Lucius to create a Diary. A Diary is a physical object you can store your memories into, allowing you to retain them beyond the 5 listed. I don’t technically need to do this now, as I only have 4 Memories currently, but the combination of Lucius remembering that he forgot someone and his time as a “scholar” seems like the perfect combination. He won’t write down the horrors of his vampire life, merely what he recalls of his mortal existence.  So, I create a new Resource for his Diary and move all his mortal Memories to this. He also loses his Gladius, though I assume that was more tied to the previous murder, rather than him settling down. I also create a new memory:

The new faith, the Christians, came for me in the wild places. I was fortunate, for they were led not by a monster, but by the kind and beautiful Pelias. I sought to seduce and ensnare him to my will, but instead it was he who ensnared me. He saved me from the mob, and I saved him from the those who dared call him “heretic.” We settled in the New Rome of Constantinople, he as a monk and I as a scholar. For the first time in centuries, I was happy.

What structures support this new feeding system? Create a simple, practical Skill and lose a Memory. 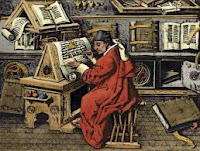 Lucius still recalls his learning at the hands of the last great teachers of Greek rhetoric, so decide that, in addition to being a scholar, he will also be a teacher. He feeds on the young men who come to him for their education, giving him the skill Tutor. For the Memory, I could transfer it into my Diary rather than losing it, but I think Lucius, in a way, wants to forget the murder of Manius all those years ago. He also, therefore, forgets why Amelia hated him so, which allows him to paint himself as an innocent victim.

I become a scholar of rhetoric, imparting ancient knowledge to the sons of the elite; alone at night, they slake my thirst.

A Mortal Character threatens your feeding system. What compelling argument do they make? How do you dissuade them? Check a Skill.

Would this be Pelias? I don’t think so. He knows who I am. Instead, I create a new mortal, Antenor, a rival scholar who objects to what I’m teaching, and how. Things get pretty heated, and I’m forced to defend myself publicly. This guy is good, but I debated Cicero.  My Oration overcomes him arguments.

No one respects the old ways, and I am challenged by the upstart Antenor, who claims I know nothing of learning. I am forced to debate him in the public square, but these new so-called “Romans” know nothing of Oration or Debate, and he withers before me.

WHY DOES EVERYTHING HAVE TO BE SO HORRIBLE? You know, Lucius was happy. He had Pelias, he had intellectual stimulation. Things were going great.

Ok, I have two Mortal characters, Pelias and Antenor. There’s no way Lucius is going to damn his lover, so it’s Antenor instead.

Overcome with pride, I made my way to Antenor’s chambers, to feed on him as a final act of domination, as punishment for daring to challenge me. But, something went wrong—he did not die, but instead rose three days later as one of my kind. I do not understand how this happened, and retreated further from the world, and my students.

Bye-bye Tutor skill, hello another damn vamp who probably wants to kill me.

You master a strange new science or field of knowledge. How does your vampire nature give you special insight into these studies? Create an appropriate Skill based on a Memory.

That’s not too bad. I forsake teaching and the publicity it brings, but still focus on scholarship. Based on my history with Pelias, I decide to go with Theology for my skill. I combine all my recent experience into a new Memory.

We find a home in Constantinople, and with Pelias’ help, I am able to find a place among mortals as a teacher. This draws unwanted attention, by those such as Antenor, who challenge me and my standing. I am able to best him publicly, but my pride leads me to feed off of him, and inadvertently create another creature like myself. Perhaps there is no peace for me, but Pelias does help me find solace in the Christian Bible.

And that’s as good a place as any to take a pause. Hopefully you’ll join me next time! 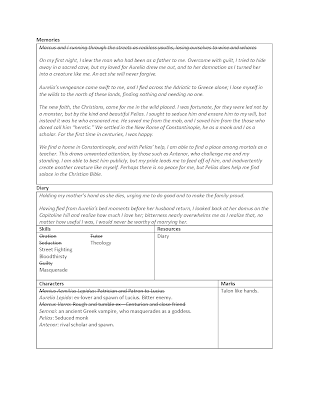