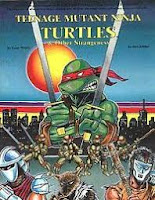 Given that it is a somewhat quirky system, I’ll be including quite a bit of the mechanics of the game as they come up. I’ve done a previous series using the Palladium system, the Metal Angel series was based off of the Heroes Unlimited game, which is, in many ways, a companion to TMNT.
Read more »
at February 28, 2019 No comments: