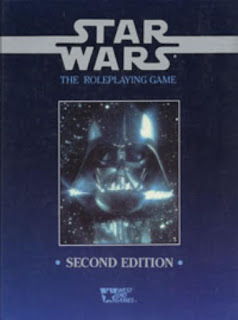 I'm not sure I can give the West End Games version of Star Wars a proper introduction. Others have written about its influence not only on RPG's, but in a perhaps unique occurrence, influence on the original IP itself.  In any case, I'm certainly not qualified to speak of the game in terms of its "greater impact," only in terms of my history with gaming.

This version of Star Wars was the first licensed RPG I ever played, and my first experience delving into a world I had already "played" in, even if that play was classic make believe of running around with friends and having "lightsaber" battles with flashlights, or smashing our toys together in pretend battles for the fate of the galaxy. Being able to combine my love for the movies with my love of RPG's was absolutely amazing! Even if the first games I played tended to focus a lot of time on smuggling "spice" under the watchful glare of imperial authorities. Still, the magic was there, and it was incredible.

The game is a "D6" game, with everything being decided by throwing six sided dice. Characters have various attributes that have a value in these dice--for example, a really strong character might 4D6 in Strength. Various skills are tied to each attribute, such as Brawling for Strength. These have their own ratings, and one combines them for the pool. All the results of the thrown dice are then added together, and then compared against a difficulty to determine success or failure. In addition, there are "in between" stages, referred to as "pips"--either "+1" or "+2." So, a character might have Brawling of 1D+2, and they would roll 5D6 and add 2 to the total. There's no +3--one just goes up to the next die at that point.  As I'm restricted to only the editions I have in print, I will be using the Second Edition for this post.

Star Wars has a Point Based Character Generation method. This is broken down into two main sections--Attributes and Skills, with some slight tweaking or modifications if one is playing a non-human or a Force user. A character starts out with 18D to spread out among their six attributes (Dexterity, Perception, Knowledge, Strength, Mechanical, and Technical), limited by Racial minimums and maximums (2D and 4D, respectively, for Humans). Any give die could be broken up into "pips" (a +1 and a +2) if so desired. For skills, you start with 7D, with no particular limitation. The rest, such as equipment, drawbacks, having a ship or not, is assigned based on the Concept, with the GM having final say, and even discretion to come up with drawbacks and flaws that the player is unaware of.

Given this setup, I'll be making a Human character for this game, just to keep things easiest.

As I've done in the past, I'll be use the Universal NPC Emulator to come up with a character--details on it can be found here.  Given that Star Wars characters are, inherently, passionate pulp characters who thrive on adventure, I'll be interpreting any result in that context.

I get an Unconcerned Master who wishes to Account for Atrocities. I decide that this character will take place after the Battle of Endor. They are a New Republic investigator, hunting down the worst of the Imperial War criminals and seeks to bring them to justice. They are "unconcerned" both about any political fall out their investigations might uncover, but also do their best to not let their emotions control them--the truth is what they seek, wherever it may lead.  Under "Template Type" I mark "New Republic Investigator." I roll and determine this character will be male. My usual random naming tool isn't really appropriate for Star Wars, so I use donjon's and go with Jaa Tharus.

I have 18D to spend on Jaa's attributes, with a minimum of 2D and a max of 4D. I go ahead and spend 12D to bring all my attributes to 2D, leaving me with 6D. I figured Knowledge and Perception are key for an Investigator, and so raise those to 4D each, leaving me with 2 left. I put 1D in Dexterity, raising it to 3D, and divide my last die. I place +2 in Mechanical and +1 in Technical.  Jaa will not be Force Sensitive, and so will have no Force Abilities. His movement begins at the base of 10.

I have 7D I can spend on Skills, so I need to pick carefully. Spending even more than 1D on a given skill is a lot when I had so few to spend. I know I want Jaa to be tolerable at defending himself, so I spend 1D on both Blasters and Dodge (both Dexterity skills). I spend 1D each on Bureaucracy, Law Enforcement, and Streetwise. I spend my remaining 2 points on two Perception Skills--Investigation and Persuasion.

There are number of skills I'd love to get, particularly some more social based ones and some piloting, and I think for a moment of dumping my Blaster. But, it's Star Wars, and even Leia knows you sometimes have to go in gun blazing. I leave things as they are for now. 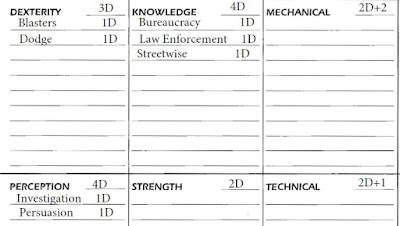 As a non-force user, Jaa begins with only a single Force Point to aid him in his quest. I assign some basic equipment--commlink, datapad, badge, and a sidearm. I would talk with my GM about any additional gear that he might have based on his current investigation, but that should represent the basics. After that, Jaa is ready to begin his adventures.

Of all the characters I've made so far for this series, Star Wars has, easily, the fastest character creation, which is a virtue all its own. The downside, such as it is, is that Jaa doesn't feel very competent. Other games, such as Stars Without Number, also ended with the PC only having a few skills at a low value, but that system only had a few skills to begin with, and deliberately kept all the numbers involved at small values, so even having a +1 felt pretty dang competent. Star Wars, by comparison, has a lot skills, and almost no limit to what those skills could be valued at. For example, in a world where it seems like all character can understand a wide variety of languages, Jaa has no language skills. He's lacking even basic competency in a number of social skills which could be useful (such as Intimidate), and would be useless in a starship--something even in a moisture farmer could pull off. He could just roll his attributes, but any such competency in that feels like it would come more from a forgiving GM rather than the character's own merits. 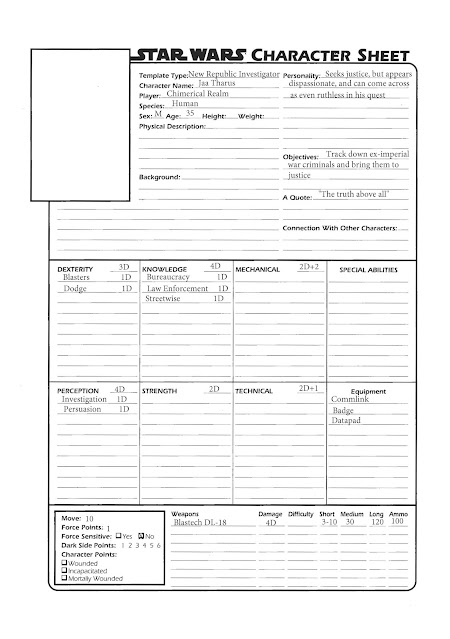