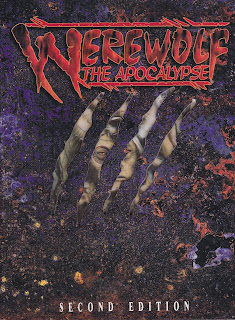 Werewolf: The Apocalypse was the second in White Wolf's "World of Darkness" lines, a "storytelling game of savage horror." It followed Vampire: The Masquerade and was in turn followed by Mage: The Ascension. In it, players take on the role of, well, werewolves in the modern day. Your kind once stood as proud, spiritual protectors of the Earth, guarding it against the deprivations of the all consuming and destroying Wyrm. The tools of the Wyrm range from raw demonic minions to the corruption of humanity, leading to violence, vice, pollution, environmental devastation, and the slow poisoning and death of the world. To put it simply and overly glibly, you are huge monstrous eco-terrorists fighting a tragic and loosing battle against destruction.

While Vampire was my first love, I played Werewolf far more when I was younger. Its combination of tragic heroism, brutal violence, splatterpunk, and adventure just appealed more to my friends than Vampire. Plus, you know, wolves are just inherently cool. Who doesn't want to turn into an 8 foot tall wolf/man hybrid and just wreck shit? And it didn't have that pesky "humanity" mechanic to make you feel bad when you ripped someone's head off and went bowling with it.

For this post, I'm going to be using the Second Edition of Werewolf. There's been a number of them, including a medieval one, and a Wild West one. There was also a 20th anniversary edition published somewhat recently, but per the rules of this challenge, I have to go with books I have in print. So, 2nd Ed it is.

Character creation in Werewolf is a point based system. There are a number of steps to follow for creation, with decisions made at each one, often to assign various "dots" in various traits. Each trait is rated on a 1-5 scale, with 1 being barely functioning or of only the most basic competency. In game, a player combines an Attribute and an Ability to create a dice pool, and rolls the number of dots in d10's to determine success.

As with most Point Based systems, Concept must come first, and will inform all subsequent decisions.

First, I need to determine my character Concept, Breed (if my character was born a wolf or a human), Auspice (one of 5 basic "types"--roughly analogous to "Class"), and Tribe (13 available, roughly "race"--what is my werewolf heritage). To determine Concept, I flip open the UNE and make some rolls. I get:

Huh. That is an...interesting concept. I could determine that this character is trickster type, but the "inept" makes me think they are trying to be an Adept, but perhaps they've been plagued by visions and nightmares, and seek to understand and overcome these visions. I decide this character is a Homid for their Breed, and thus relatively ignorant of the greater spirit world and the "true struggle" happening in the world. For Auspice, I go with "Theurge"--the "magicians" of the werewolves. For Tribe, I think about Uktena (the most magically gifted of them all), but decide that it doesn't fit the Inept idea. Instead, I'll pick Bone Gnawers--they are the "wild urban dogs" that populated abandoned areas of cities, and are the most despised of all the Garou (the "proper" name for a werewolf, at least according to them). I flip a coin, and decide this character is a woman. Her name is Tasha Wright.

Now, I need to pick her Attributes. Werewolf has 9 of them divided into three categories--Physical, Mental, and Social. I pick one to be Primary (and assign 7 points among those three), one to be Secondary (5 points), and Tertiary (3 points).  Each begins with a value of 1--so, for example, if I assign 1 point to Wits, Tasha will have a final rating of 2.

Mental makes sense for a Theurge, but I don't want her to be too competent in her field--she has a calling for it, but lacks the proper training. Instead, I assign Social to be Primary, Physical Secondary, and Mental Tertiary.

Like Attributes, Abilities are divided into three broad categories--Talents, Skills, and Knowledges. I will need to pick a Primary (and have 13 points to spend on those abilities), a Secondary (9 points), and a Tertiary (5 points).  Unlike Attributes, these all begin at 0, and will need points spent to gain even the most basic of competency. Knowledges are typical the go to for Theurges, but I decide to make these her Tertiary--she has only the most basic knowledge in her field, and that is one of the challenges she must overcome.

Instead, I make Talents primary, focusing on her self-taught skills and interaction abilities.

I have 5 points to spend on Tasha's Backgrounds, but these are limited by her Tribe. As a Bone Gnawer, she can't pick Past Life, Pure Breed, or Resources. I decide to pick a 1 in Rites, a 2 in Mentor, and 2 in Contacts.

She also gets a variety of magical "Gifts"--in each for her Breed, Tribe, and Auspice. For being a Homid, I pick Persuasion (makes her arguments more, well, persuasive). For being a Bone Gnawer, I pick Scent of Sweet Honey, which allows her to "curse" a target which will then be swarmed by various vermin. Finally, as a Theurge, I pick Spirit Speech, which allows her to talk to denizens of the other world.

As a Theurge, she begins with 3 Wisdom Renown, which determines how other Garou react to her.

I now figure out some other values for the character. As a Homid, Tasha start's with 1 Gnosis--the general spiritual awareness of those who walk in two worlds. As a Theurge, she starts with 2 Rage--the primal fury that powers these warriors of the earth. And as a Bone Gnawer, she starts with 4 Willpower.

I also go ahead and calculate her Attributes in her various forms. As a werewolf, Tasha can change in to a Glabro (mostly human, but bigger and tougher), a Chrinos (half wolf), a Hispo (dire wolf), or a Lupus (regular world), with corresponding changes to her base Attributes.

Finally, I have 15 Freebie Points to spend on rounding out Tasha. I can spend these on anything, but different traits have different costs. For example, increasing an Attribute costs 5 points per dot, while a Background only costs 1. I really want to boost her Gnosis--her "Theurgeness" is pretty lacking, and I want to offset that with raw potential. This costs two points per dot, and I spend 10 Freebie Points to increase her rating by 5 (to 6). I have 5 points left, and I spend 1 to increase her Rage (she won't be much of a warrior, but it's useful for everyone), and the remaining 4 on her Willpower.

I've mentioned it before with other White Wolf games, but I really enjoy the system they use for Werewolf. There's plenty of meaningful decisions to make, but the process is never overwhelming. All in all, a fast and very fun experience. 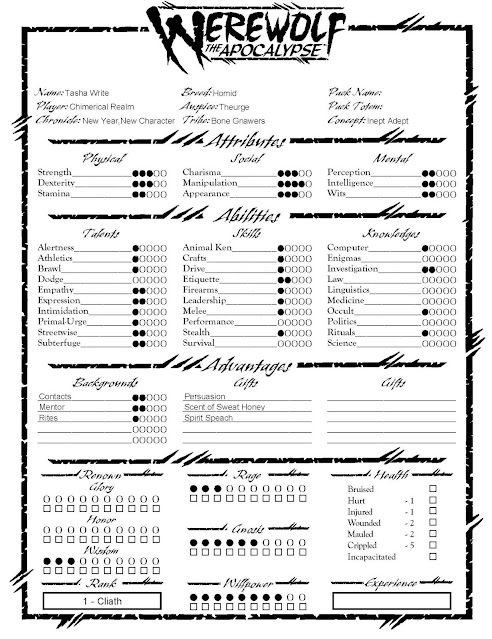