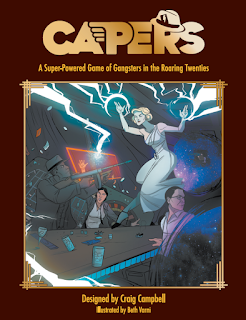 CAPERS (yup, all caps), is a superhero RPG by Craig Campbell, with two unique twists. First, in 1920's America, at the height of Prohibition. Rather than "fighting crime," the default PC is a criminal, running alcohol and protection rackets. They're not super-villain's but rather, well, super-criminals. There's the option of playing super G-men as well, but the thrill of the game is to play proper 1920's gangster with super-powers.

It also has, for me at least, a unique resolution system, driven by drawing playing cards. Ones value in any given statistic indicates how many cards one can potentially draw to resolve any issue. Obviously, the card value is a key component, indicating success or failure. The suit of the card determines the quality of the success or failure, with clubs being the lowest and spades the best possible. Thus, the PC's not only gamble with their life and freedom to find a place in the world, but the players take a gamble with each action they take. And, yes, card counting is thoroughly encouraged.

I backed CAPERS on Kickstarter , immediately entranced by the concept of the game. I've run a few "villianous" super-hero RPG's, and they can be quite fun. Generally, I like to run them leaning heavily into the tropes of comic book super-villain's, but the combination of "grounded" yet still "pulpy" adventures was one I couldn't pass up. Unfortunately, I haven't actually had a chance to run a game of CAPERS yet, so this will be another "learning a system" type post.

CAPERS is a combination Concept/Random character generation system. While you do pick a Concept and have various decisions to make to bring that Concept to life, there are also various steps where you draw cards to fill out random elements. There are six Traits/attributes--Charisma, Agility, Perception, Expertise, Resilience, and Strength--rated on a scale of 1-3; having a relevant skill gives you a +1 to the total. The final value reflects the maximum number of cards you can draw to resolve an action. But, you only get to play the last one you drew. So, if you have a 3 in an Attribute and an appropriate Skill, you have a total of 4. You draw one card, and decide if you want to keep it or not. If not, then you draw a second one, but if you are unhappy with the result, you can't "go back"--you either play what you have or draw again.

Normally for these kinds of decisions, I turn to a randomizer (often The Universal NPC Emulator) to help guide my decisions. But the characters of CAPERS are a bit more focused. Instead, I want to make a proper criminal, a hard nosed robber and crook in the mold of Richard Starks Parker.  So, ruthless professional thief is my basic concept. In fact, I go ahead and name him Porter, after Mel Gibson's character in Payback, which was based on the Parker novel The Hunter.

Now I need to determine Porter's Identity, Virtue, and Vice. Each serves to determine how he will interact with the world, as well as how they gain the in-game resource of Moxie. For Identity, I draw a 3 of Clubs. Per the chart, this means that Porter is a

Pushover: You are unimposing and non-confrontational. Gain Moxie when you manage to avoid confrontation and still succeed.

This is fairly at odds with my Concept. Porter was supposed to be a brutal and terrifying figure, but seeing him as a Pushover is...interesting. I still seem him as a crook, but he'll be one who focuses more on stealth and sneaking. In fact, maybe he's even one of those guys you would never think is involved in "the life."

Virtue determines the characters most morally commendable characteristic, something that others respect and look up to. I draw a 10 of Spades and get

Moderate: You never over-indulge in anything 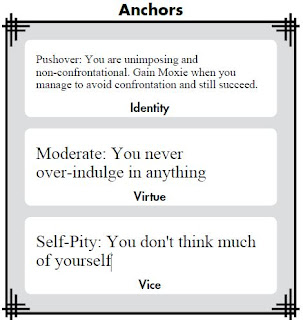 Not the most fascinating of traits, but fits well with the Pushover Identity. Def. a guy who only steals "sure things" and launders the money carefully and appropriately. He's not some maniac who grabs whatever he can.  I gain Moxie when Porter stays true to Virtue, even when it would be easier to ignore it.

Finally, I draw for his Vice, the characters greatest weakness, and that which he needs to overcome. I draw a Jack of Hearts and get

Self-Pity: You don't think much of yourself

This also fits with the Identity, and I see the struggle for this character is one more internal than external. He's a bit of a loner, and his story, at least initially, will be about figuring out what he wants and how to attain. Stealing small amounts discretely will only get so far, but each heist will draw him ever further into the dark and complicated world of gangsters and lawmen.

I have 6 traits to choose for Porter, and need to pick their values. One starts with a value of 1, one with a value of 3, and the rest at 2. I decide to stick Charisma at 1, representing his lack of social competence or force of personality. For his 3, I place it in Expertise, showing how skilled and competent he actually is. The rest get a value of 2.

Each Trait also has a "Defense Value"--indicating how difficult it is for others to overcome the character's raw ability. Higher is better, and is based on the Trait. So, Porter's Charisma has a defense of only 8 (showing how easily he can be pushed around socially), while his Expertise defense is a 10. It's possible to increase all these stats later with powers. 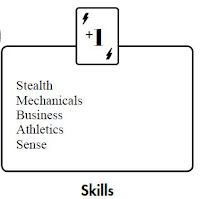 A character has a number of starting skills equal to their Expertise value +2. So, Porter has 5 skills to choose. I immediately pick Stealth and Mechanicals for his thieving abilities. I avoid social skills, playing off of his Identity and Vice, and instead go with Business (remember, he's good at laundering his stolen wealth, and is Moderate enough to do it "properly"), Athletics (he's shaping up to be a "second story man"), and Sense (he's nervous enough to have "eyes in the back of his head").
Step 5: Perks, Powers, and Trem-Gear
There's a couple different ways to reflect a "super" character in CAPERS, from super-powers, special training (Perks), or super-equipment (Trem-Gear). For Porter, I'm going proper CAPER, and giving him Powers.  Each Power is either a Major or a Minor one. He can start with either a Minor Power at Rank 2, two Minor Powers at Rank 1, or a Major Power at Rank 1. Having a rank of 1 in a Power also lets me choose three Boosts for that power (these generally cost Moxie), and gain an additional Boost if that Power Rank increases.
His Identity and, well, name leads me to "Dimension Step." This gives my character the ability to create portals of roughly 6 feet in size. One appears next to Porter, the other within 30 feet of where he can see. He has three Boosts, and I give him Range (increases to 100 feet), Redirect (I can use the portals as defense against ranged attacks), and Chaperon (I can bring someone with me). 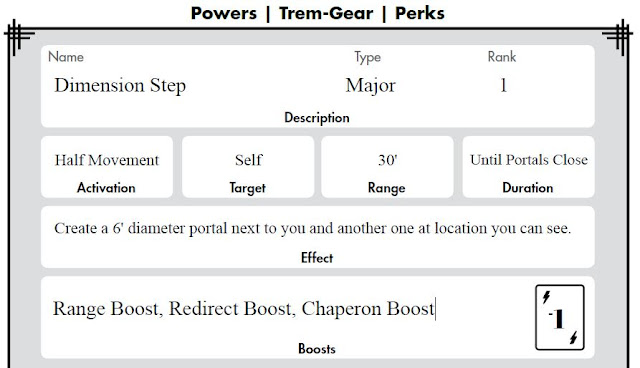 Step 6: Finishing Touches
I'm almost done with Porter, I just need to figure out things like his speed, his points, and his starting gear. His Body shows how hard it is to hit them, and is equal to his Agility Defense. His Mind shows how what it is to affect them mentally, and is equal to his Perception Defense.  Both of these are 9. Speed starts at 30', and would be modified by Powers or the like, but Porter doesn't have any. So, 30' it is.  Moxie starts a 3. And Hits shows how hard Porter is to take down. It is equal to 4+(2 x Resilience Score) + (2 x Charisma Score).
All characters start with $150 to spend on starting gear. I spend 50 or so on clothing, but keep the rest. Given his limited resources, I assume he's just had an unfortunate run of luck--he's old "schemes" feel apart, and he's arrives in the city needing to rebuild.
Final Thoughts
I still like the concept of CAPERS and would love to actually see it in action, but I'm a bit frustrated  with how they combined Choice and Randomness. While I do rather like how Porter shaped up, he isn't the character I had in mind as a Concept. I'd rather not have a Concept at the beginning, or not have such key character traits as Identity and Vice or Virtue be left to chance. I'd rather have random powers, if given the option.

Still, CAPERS is a pretty unique and interesting game, and one I look forward to checking out in more depth.
Here's Porters final sheet: 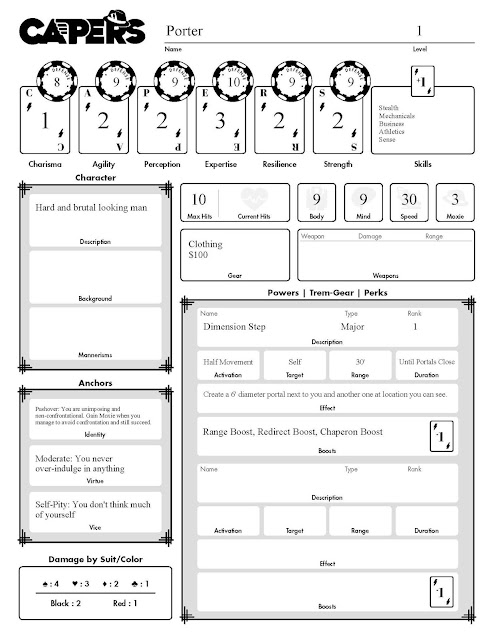