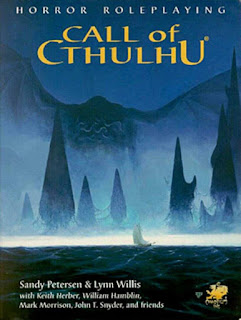 Call of Cthulhu (CoC) is one of oldest, most famous, and venerable RPG's out there.  Even if you haven't played it, you know about it. Inspired by the writings of horror author H.P. Lovecraft, CoC takes the players into the world of weird horror. They play investigators of the mysterious, bizarre, and unknown. While horror has always been one of the keystones of RPG's--even Blackmoor had "Sir Fang," the vampire--few tackled with anything resembling the care and precision of CoC. This was no casual horror adventure, where the monster was slain and the heroes moved on.  Rather, battling the "Cthulhu mythos" would cost the PC's their lives, their careers, and even their sanity.
To some, it can come across as overly dark and nihilistic. Why bother finding out what the mysterious statue represents, or what happened to the eccentric artist cousin of yours, if all you were going to find was death and madness? The stars will, one day, be right, the Old Ones will arise, and the age of man will come to a close, after all. But, for me, it's the very bleakness that makes the glimpses of light and the potential heroism of the PC's that much more bright. Yes, the Old Ones will arise, but through your skill, luck, and determination, you might be able to push if off for one more century, or year, or even a single day. It may mean nothing in the long arc of the universe. Hell, our lives may mean nothing in the long arc of the universe. But, for that one day, your lives mean everything. And that is a victory all its own.

There have been a number of editions for CoC over the years, and one of its great virtues is how compatible they all are with each other. From 2nd-6th edition, the rules changed only slightly, and an adventure or supplement written for one could be run pretty much "as is" with any other. 7th changes things up slightly, but the core is still the same, a testament to how much they got right the first time. Since I am limited by my self-imposed rules for this series to only use games I have in print, I will be using the 5th Edition of the game.

Call of Cthulhu's Character Creation is a bit of a mishmash. There are 9 attributes which are rolled randomly (most on a scale of 3-18). From these, one then generates varied derived stats, such as Idea, Hit Points, and Sanity Points. The attributes also determine how many skills points one gets to spend, and skills are based on a percentile skill. The main choice a player can make is in their Occupation, the closest thing the game has to a "class," though it just boils down to a select list of skills that they can put their "primary" pool of skill points into.  I'll explain in more detail as we approach each step.

I don't necessarily need to do this step, as what decisions I do need to make will be as a result of the characters attributes. There are a few things I want to set ahead of time, though. This character will take place in the "classic" CoC era of the 1920's, as opposed to the modern world or the 1800's. For gender, I flip a coin and decide this character will be a woman. I then turn to the Everyone, Everywhere List and go to the "pulp/noir" section. Her name will be Patsy McLeod.

Now I need to roll Patsy's attributes. Different attributes use different dice to roll them. Most will use 3d6, so I start with those. Here's what I get:

So, she is physically fit and fairly attractive, though with only average POW, I doubt she has much pre-existing experience with the supernatural. I start thinking of her as an athlete of some sort. The next two attributes will be rolled with a 2d6+6
She's of roughly average size, but very intelligent. I still need to roll for her final attribute, which will be a 3d6+3.
She's also extremely well educated. I see her an academic, perhaps having just received her Doctorate. Her athletic background comes from her playing what sports were available women at the time.  I enter these results onto her sheet, and note that her Sanity score begins equal to her POW x 5, for 50.
Step 2: Characteristic Rolls
There are three "Characteristics" determined by the characters Attributes that cover for things outside the normal rules. These are all percentiles calculated by multiplying 5 to the appropriate attributes. So, Patsy has an IDEA roll of (INT x 5) 75, a LUCK roll of (POW x 5) 50, and a KNOW roll of (EDU x 5) 100. However, since no one can know everything, this is capped at 99.
I also need to determine her Damage Bonus, which is figured out based on adding her STR and SIZ and comparing the result to a chart.  With a sum of 27, Patsy's gets to add 1d4 to all hand to hand and melee damage rolls. There's also a value for "maximum sanity" based on 99-Cthulhu Mythos, as the more one learns about the true nature of reality, the less stable one becomes. As she has no value in Cthulhu Mythos, I simply enter "99" in this field.

Step 3: Determine Derived Characteristic Points
This is where I figure out Patsy's Hit Points, Magic Points (used to fuel spells), and Sanity Points. Hit Points are the averaging her CON and SIZ. Thus, Patsy has ((17+13)/2=) 15 Hit Points. Her Magic Points are equal to her POW of 10, and her Sanity Points begins equal to her SAN of 50. These will fluctuate over the course of the game.
Step 4: Occupations and Skills
First, I need to figure out how much money Patsy has. This is a simple d10 roll compared to the era appropriate chart. I roll a 7 and so Patsy makes $6,500 a year. She has 5 times that amount is "assets" (stocks, property, etc.), or $32,500. She has one-tenth of that available as cash, or $3,250.
Then I need to pick her Occupation. There are number listed in the book (and quite a bit more in various supplements), but if none of them seem to fit, I could create my own. I decide to stick with the standard ones, and choose Professor for her. This gives her Bargain, Credit Rating, Library Use, Other Language, Persuade, Psychology, and two others based on her specialty. I go with "Historian" for her, and pick up History and Archaeology, and assign "Latin" for her Other Language.  I then multiply her EDU by 20 (for 400), and have that many points to spend on these skills. Each has a "base" value (generally ranging from 0 to 5 or 10), and having a few skills high is generally better than a lot of middling ones. I spend 55 points to increase her Library Use from 25 to 80, and put 60 points each into Psychology and Persuade. I figure Bargain will be her least useful skill, so only place 25 points into that, making it 30. I spend 60 of the remaining 200 points on Latin, leaving me with 140. I put 40 points into both Archaeology and Credit Rating, and the remaining 60 into History. 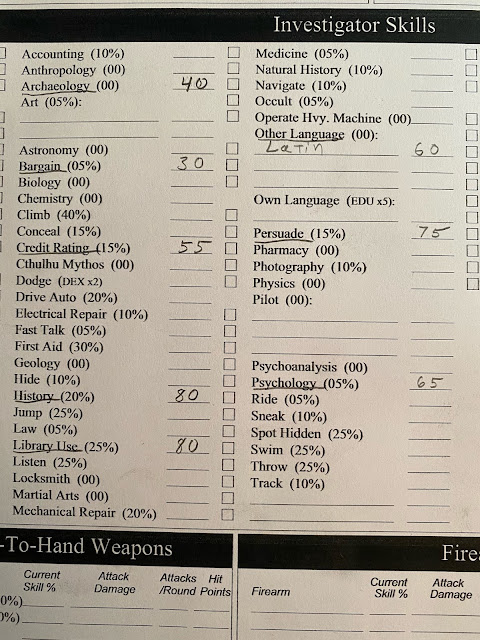 Next,  I need to calculate her "Personal" skills. Her training and occupation as an historian is only one aspect of Patsy, after all, and she has a pool of points she can pick for other things. These are based on her INT x 10, or 150. Going off my original conception of her as an athlete of some sort, I decide to spend the bulk of these on more "physical" skills.  I spend 50 of those on the Saber skill, seeing her as something of a fencer. Combined with its base value of 15, this gives her a respectable 65%. I spend 20 points on both Climb and Swim. I worry a bit about her defense. Her Dodge skill begins at a value of DEX x 2, or 24. 24 isn't horrible, but still too risky. I spend 30 of her remaining points to increase it to 54, and then the last 30 onto Occult. I also note that her Own Language skill begins at a value of EDU x 5, or 99 for Patsy.
Step 5: Determine Weapons
Patsy's not really the type to carry a gun or anything. Well, at least not yet. But, she is quite skilled with a sword, and I can see her having collected a few, perhaps for display at her house or in her office. She might also have a basic practice weapon left in the trunk of her car. In any case, I make a note of the statistics for her Saber on her sheet.
Step 6: Additional Background
This is where I figure out everything else about Patsy. Her minimum age is equal to her EDU+6, giving her a 26. That sounds fine for how I envision her, so I leave it at that (though, I could make her older for more skill points). Everything else is up to me. I decide that she is from a small town in Pennsylvania called Lakeview, and has her PhD from Arkham University. And with that, Patsy is ready to be investigate.

As the example above should so, Call of Cthulhu's Character Creation is...fiddly. Lot's of rolling, and then calculating based on those rolls, and then pools for THESE kinds of skills, and a different pool for THOSE kinds of skills. Honestly, trying to explain it can make it sound overwhelming.

But, the book does a wonderful job breaking it up into manageable chunks, allowing even novices to quickly and easily create an interesting character. Not only that, but it can be quite fun, as you're never quite doing the same math or the same decisions twice. The only real concern I have with CoC is the "the more skills, the dumber the character" that affects such systems. But, this isn't as bad in CoC as it might be in another system, due to the game's emphasis on how tiny, weak, and fundamentally mortal the PC's are.  Besides, creating a new character is fairly quick, all things considered, so when Patsy goes mad or is devoured by something from beyond human ken, making a replacement character won't keep me out of the game for long. 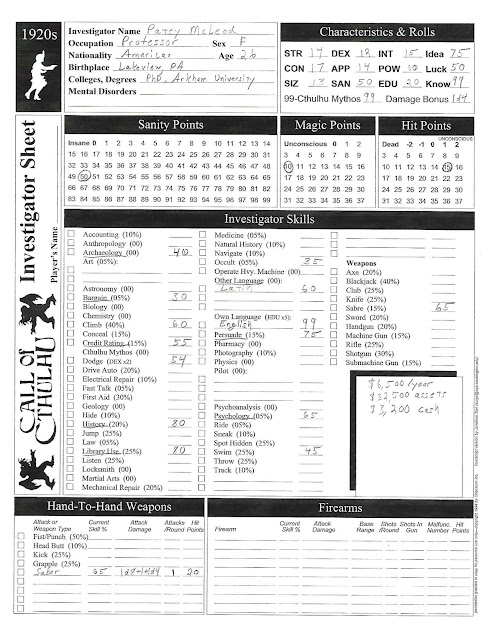