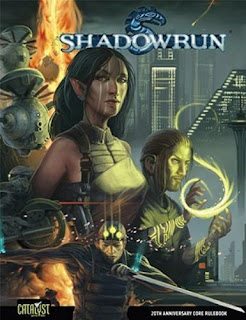 Of all the games from my initial list, Shadowrun was the one I was most dreading. I've never actually made a proper character for the game. The only GM I've ever played it under is an expert in the game and world, not only running it for decades, but he even wrote a few source books as a freelancer. For my first character, he worked closely with me, and we used an auto-calculating spread sheet. Subsequent characters were "pre-generated" by the GM, using Hero Lab.  So, this will be my first attempt to make a real character, by the book, with no help.

Even separate from Character Creation, Shadowrun is an intimidating game. Its a mix of cyberpunk and fantasy, melding together over the top action, cyborg super soldiers, magic of various type, netrunning...there are just so many sub-rules covering all of these "types." And the world is just as complex, being gripped in decades chaos and change, with old nations falling apart, and myriad new ones rushing to fill the void. Oh, and then there's the Races--you have Orcs, Elves and Dwarves running around as well, due to magic stuff. And the game has decades of modules and novels and multiple editions that have constantly driven the meta-plot forward.

I try to read the book, and am forced to accept the fact that I have no idea what is going on.

But, the only way to do so is to try, and so that's what this is. I'm hoping Character Creation will be simpler and more engaging that I fear, and that by doing so certain things I've never quite understood will click. As per the rules of this series, I'll be using the 20th Anniversary Edition of the game, as the only version I have in print.

Shadowrun uses a die pool mechanic to resolve challenges. You add your Attribute and Skill to create a pool of six sided dice, with 5 & 6's counting as successes. Character creation is Point Buy. Players begin with a pool of, generally, 400 points to be used to 'buy" everything for a character--Attributes, Skills, Contacts, even starting equipment.  The typical character is a "Shadowrunner," a mercenary hired by governments and corporations to perform any number of "Black Ops"--industrial sabotage, theft, kidnapping, even murder and assassination. They are deniable, and disposable. They hope to earn enough to retire to a life of luxury. Some do, but most end their Shadowrunning careers in a shallow grave, forgotten.

As is normal for Point Buy games, the character's Concept has to come first. As such, I turn to the UNE and get:

Actually, sounds like a classic Shadowrunner, even if he's one who is more poised and, well, "thoughtful" than most of the gunmen who ply that trade. I flip a coin and decide that this character will be a male. Shadowrun, having a legacy of  American fears of the 80's, has a strong Japanese influence, so I decide to go with a Japanese-American. I give him the "Modern America" first name of Bridger and a "Japanese" surname of Tanida.

There's a lot of different Races you can play in Shadowrun--Humans, Orks, Dwarves, Elves, or Trolls. I don't see my Thoughtful Gunman as being any in particular. On the other hand, I've only ever played Humans in Shadowrun, so I think I'll go with an Elf. Being one costs me 30 of my points, and gives me some bonus starting attributes and Low-Light Vision

Qualities are the "Merits & Flaws" of Shadowrun. There's a pretty wide variety of them to choose from, giving your character various strengths and weaknesses. It's the later I'm mainly interested here, as I'm hoping to get a few more points to boost Tanida a bit. I decide to give him a Mild Addiction (alcohol) [5 points], an Allergy to Cold Iron (Uncommon, Moderate) [10 points], and Incompetent (Hacking) [5 Points]. This gives me 20 points.

While I'm here, though, I see the Quality of Adept--a different kind of magic user that "purchases" various upgrades. I've never played one, and it's different enough from my previous cyborg killing machine to attract my attention. I decide to go for it. This Quality costs me 5 points. I consider getting Ambidextrous as well, as "dual wielding pistols" is always a good image. But, I decide against it, just for personal reasons. After getting Adept, I have still gained 15 points, bringing my total to 385.

There are 8 Attributes in Shadowrun, and most start at 1. Each Race has different maximums for each of these. For example, as an Elf, Bridger can have a max value of 6 in BOD, but can get up to a 7 in AGI. I can spend up to 200 of his Build Points on Bridger's Attributes, and I intend to spend as close to that as possible. As an Adept, he gets another Attribute, Magic, which is very important for his abilities, but this is not limited by the 200 points.

I decide to spend the 65 to increase his AGI from 2 to 7, and 30 points to increase his REA from 1 to 4. Without many points left, and not desiring any significant weakness, I divide up the rest evenly among the rest, leaving Bridger with a 3 in all other Attributes. Fortunately, he started with a 3 in CHA, so I didn't spend any points in that. All of this costs me 195 points.

I also need to work on his Magic Attribute, which also starts at 1. I can't buy it up to 6, since you can only have one "max" Attribute, and I doubt I have the points. I do want him to be strong with his Magic, so I decide to increase it to 5, which costs me 40 of my remaining points. I now only have 150 for the rest of Character Creation.

I almost forget, I also need to buy Edge at this stage. Edge is an in-game currency you can use to boost your characters dice pools for those critical moments. Bridger has a starting value of 1, and it costs the same as an Attribute. It pains me, but I spend 30 of my remaining points to bring it up to 4, leaving me with a 120. I fear I might need to come back to this step and decrease some of my Attributes. That 7 Agility which seemed so critical is starting to feel like a luxury I can ill-afford.

Skills in Shadowrun are divided into Active and Knowledge Skills. I'll tackle the Active ones first. Active Skills cost 4 Build Points per rank, and have a limit of 6 at creation. Though, you an only either have one skill at 6 or two at 5, the rest must be at 4 or less. And, yeah, I WANT Pistols at 6, but I'm just not sure I can afford the 24 points for that one skill.  I could also purchase Skill Groups. These generally consist of 3 or 4 linked skills. For example, the Firearms group contains Longarms, Pistols, and Automatics within it, and that would only cost me 10 Points per level. But Skill Groups can only go as high as 4.

Fortunately, the next batch of skills have their own pool. Knowledges represent "everything else" the character knows, all the background and professional and hobbies that aren't covered by the more adventuring focused Active ones. You add your Logic and Intuition together, then multiple by 3, so Bridger has 18 points to spend here. This is also where you get your Language skills. I'm not sure what Languages there are in the world--for example, do Elves have their own language? So, I play it safe. I say that English is his Native, and spend three points to give him Japanese at 3. I also grab "Elven Legends" at 3, Manga at 3, Professional Chef at 4, Gun Suppliers at 3, and Seattle Street Gangs at 2. 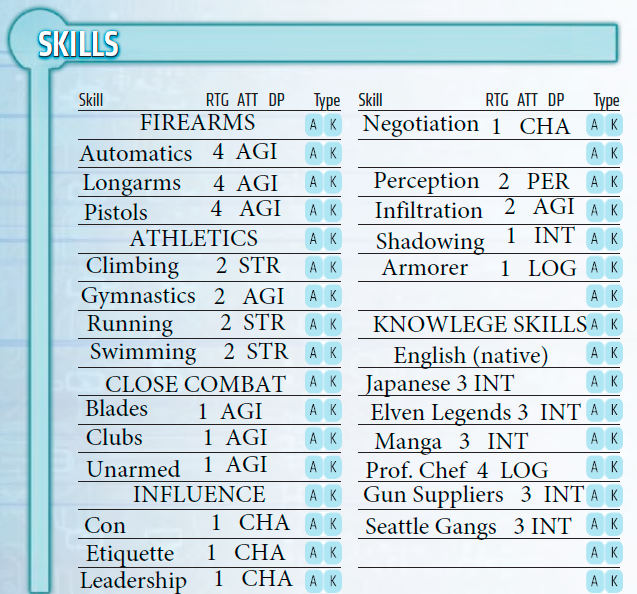 Step 7: Assign Resources
I have 16 points left to spend, and two major things to buy--Gear and Contacts. This is also where I'll figure out my Adept powers.  I decide to worry about Contacts first. Each of these has two values--Connections (how influential and useful they are) and Loyalty (how much they'll sacrifice on the characters behalf).
I decide to spend 10 points on Contacts. One is his "Sensei", he is a mentor to Bridger, and so is pretty loyal (4), but only knows those in the Adept community (connections 1). The other is Bridger's cousin, who is not decently ranked in a gang (Connections 4), but doesn't really know him except through casual family gatherings (loyalty 1). I call his Sensei "Akio" and his cousin "Jordan."

I take the remaining 6 Build Points and set them aside for gear. Each Build Point will turn into 5,000 nuyen (the major currency of Shadowrun), leaving me with 30,000 nuyen to buy Bridger's equipment. But first, I want to sort out his Adept Powers.

Each level he has in Magic (5) gives him one point with which to buy his Adept powers. So, he has 5 to spend. I first look at Improved Physical Attribute, to boost his Agility. The base cost for this is .75 per level, but the cost increases for going above the natural maximum. Bridger's AGI is at the maximum (7), so instead this will cost 1.5. If I go all the way to 10 (the max "enhanced" valued), it will cost 4 of my points, and that is just too much, even for me. Instead, I buy Attribute Boost at 4, which cost me one point (.25 per level). This I'll need to roll, but it allows Bridger to boost his AGI when he needs to, and most of the time rely on "merely" having a 7.
I also spend 2.5 on Improved Reflexes, giving him +2 to Reaction and 2 extra Initiative Passes. I round out the choices with 2 levels of Combat Sense (1 point) which gives him a bonus to reacting to surprise and defense, and 1 level of Mystic Armor (.5 cost).
Now I can finally worry about my starting gear. I only have 30,000 nuyen to spend on Lifestyle, weapons, armor, licenses, fake ID's, and other assorted stuff.  I get him some weapons, some armor, a decent cell phone, a Lifestyle, and what not. I actually end up spending less that I had planned, and  have 2 Build Points left. I go ahead and buy 1 Knowledge Skill of "Philosophy" to try and salvage the "thoughtful" part of his concept.
Final Thoughts
While not quite the horror show I had been led to believe, creating a Character in Shadowrun was easily the most challenging one to date. Like the other Point Buy games I've covered, figuring out what to get and how to balance all the options was very tricky, and I'm certain I made some obvious blunders. Maybe I shouldn't have gone for an Elf, but instead stuck with a human? Was maxing out Agility a mistake? I mean, I could have just enhanced that later with an Adept Power. And was the 45 points I spend to be an Adept and have Magic 5 worth it, or should I have dumped those points into gear and gone with a cyborg type character? If you have a very clear idea of what you want to play and spend the time figuring out how everything fits together, I'm sure Shadowrun can be a wonderful game. But if you're coming in fairly cold and have only a vague concept, it can be rather overwhelming.
I think the Agility 7 was a mistake.
Anyway, here's the final sheet. 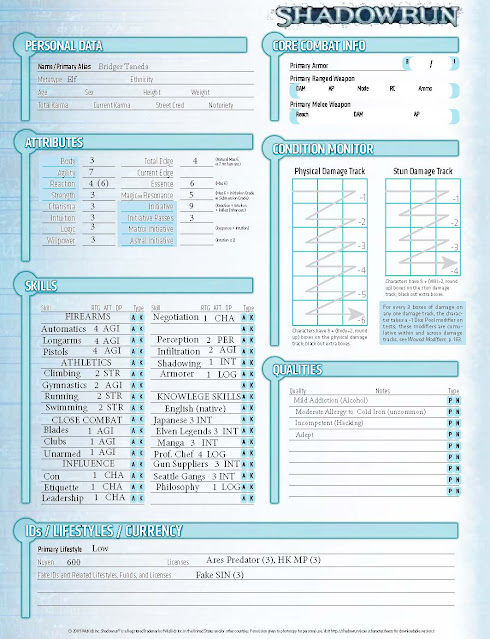 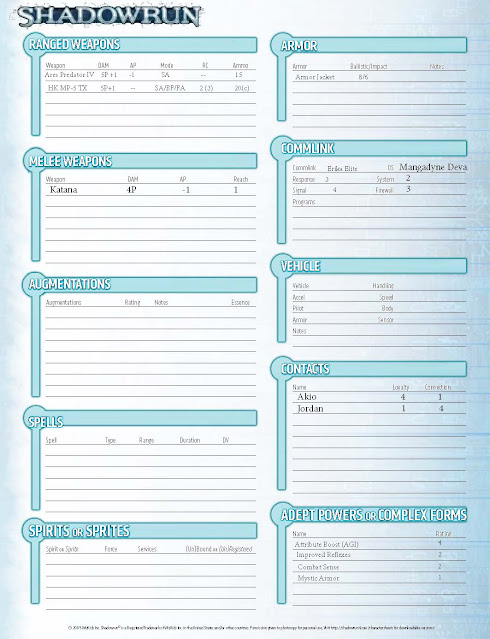