Wolves of God is a stripped down, OSR-influences game of adventure and survival in Anglo-Saxon England. While placed in an historical time and place, much like Ars Magica this is a "fantasy" version of the real world, with ancient magic buried in Roman ruins, and the potential of supernatural monsters lurking amongst the bogs and fens of the wild.

Despite the fantastic elements, Wolves of God is hyper focused in creating the society and world of the time. The most obvious comparison, for me, is with Pendragon, another game that sets the characters firmly in the historical world of post-Roman Britain. But despite using the real world to fill in the gaps of the sagas, Pendragon was always more focused on recreating the characters of the legendarium. Wolves of God attempts the opposite, to include the legends, but also to tell adventures of something like a real person of the time and place. It's a complicated thing to pull off, but I believe it does so quite admirably.

Part of this, to be fair, is in the writing. The entire game is presented as if it were a true document, a long lost and recently rediscovered work that is only now being published. It presents Wolves of God as a translation of an authentic roleplaying game written during the 8th century, thus making it the oldest complete copy of an RPG in existence. Reading a game supposedly written by a Christian monk in 710 A.D. is a very different experience.

Unfortunately, I have not yet had a chance to actually play Wolves of God. I backed it on Kickstarter due to the strength of Kevin Crawford's previous work, but the long shadow of Dungeons & Dragons seems to have a stranglehold on my gaming circle. Having merely read it, it strikes me as a unique and fascinating game, one with potential to tell stories that other games, even other Sine Nomine ones like Scarlet Heroes, would be ill-suited to even attempt. Therefore this will be another "first character" with the system, as I attempt to delve deeper into the game rather than merely reading the text.

Much like its fellow Sine Nomine games, the basic system is rooted in Labyrinth Lord/Basic Dungeons & Dragons, with a simple skill system added for completion. Skills are rated from from -1 (untrained_ to +4 (mastery), with beginning characters limited to +1 in any given Skill. Players roll 2d6 and add their Skill and Attribute modifier to determine success or failure, Attributes are the "classic six" of Strength, Dexterity, Constitution, Intelligence, Wisdom and Charisma.

Much like its brethren (including Silent Legions and Stars Without Number), Wolves of God favors random character creation. Players roll for their Attributes and Backgrounds, but can choose their Class. Four of these are available: the Galdorman (wielders of arcane arts and sinister secrets), the Saint (pious men and women), the Warrior (the battle hearty and pure Englishman), and the Adventurer (a mixture of the previous three). Each is heavily flavored with the biases and religious traditions of the age, and the Galdorman in particular most walk a narrow path. The could become a "Merlin" type figure--feared, but respected and at least believed to be Christian. Others would be hunted by all good, God-fearing folk.

To start creating a Wolves of God character, I need to determine their Attributes. I do this by rolling 3d6 for each. In the even that none of my rolls are 14 or higher, I can increase any one Attribute to 14.

I get a half-decent spread. Nothing low, but also nothing terribly impressive, either. I can go ahead and assign any of these to 14. I'm leaning towards playing a Warrior, but I'm not certain yet. I decide to change his Constitution to 14, as having a few more Hit Points will help any character I end up making.  I also decide to make this character a male and give him the name Edwin.
Step 2--Backgrounds
Now I need to determine Edwin's background, what he was before he was trained up to be a hero. He might have been a simple shephard, or the son of an Eorl. Each provides different skills, but all are "useful"--everyone in this time and place must work, after all. I determine his background by roll a d10. I get a 9, for a Thrall. Thrall's are, basically, slaves. I am not tied to the land, but to another. I might have been born a thrall, or were captured in battle or raid.  At the start of the game, I'm free--either by manumission or stealth, but it still defines where Edwin comes from.
As a thrall, I get Toil-0 automatically. There's a few extra ways to get more skills--the quick way in which I get Sneak and Exert, or I could pick any two from a list. I decide, however, to go with the Roll method. In this, I can roll 3 times on either the Growth (with the possibility of Attribute increases) or Learning (for random Skills). I start on Growth and roll a d6 and get a 3. This is exactly what I wanted, as I can get a +2 to any Physical Attribute, OR divide it into +1 to any two Attributes. With 13's in both Strength and Dexterity, I can now increase these to 14 each, and get a +1 modifier to each.
I got the best I could for Edwin from Growth, so now I roll on the Learning table. I roll two d8's and get 6 and 2, which gives him Notice-0 and Any Skill. I decide to go with Sneak-0 to give him a bit of a stealthy kind of vibe.
Step 3--Class
With 14 in all his Physical Attributes, going Warrior with Edwin makes the most sense. As a Warrior, he gets a +1 to his To Hit Rolls, and an additional +1 per level. he begins with 1d6+2 for Hit Points, for 7. I also get to add his Constitution modifier to this, for a very healthy 8 Hit Points.  He also gets the ability to, once per combat, turn any missed attack into a successful hit or turn a successful hit against him into a miss. He also gets an extra Focus, which will come up later in Creation.
Step 4--Wyrds
Each character begins with three Wyrds--a destiny that awaits them in some form. Two of these are noble, and one is ignoble. In game, they help protect a character, as no matter what ill-fate befalls them, they can not die until their fate is completed. Well, unless they attempt to abuse this fate. For Edwin's noble Wyrds, I roll a 03 for "An angel guards me from above" and 26 for "I am a scourge to Hell's sons." For his ignoble one, I roll a 58 for "I speak reckless insults without cause."
Step 4--Focus
As a Warrior,  I get to pick two Foci for Edwin. I want him to be a solid warrior, so I pick "Bringer of Endings" first. This gives him Spear as a bonus skill, and increases the possible damage he can do. Based on his Wyrds, I pick "Harder be Purpose." This will allow him roll all Mental Saves twice, taking the better result. With only average Mental Saves, this will be a critical aid in his scourging of Hell's sons.
Step 5--Final Touches
At this point, I need to determine his hit points and name, which I've already done.  I also need to pick his homeland--there are a number of Anglo Saxon kingdoms to pick from, but I decide, based on his background, to make this character Welsh, or Wealh. As such, he speaks both English and Wealh.
Wolves of God has three Saving Throws--Physical, Mental, and Evasion. Each starts at 15 minus the highest modifier between two Attributes. This is also where I would define Edwin's relationship with the rest of the party. I don't have a party, so I skip that. The last step is equipping him. He begins with a spear, a shield, a leather sack, three days of hard bread, and a waterskin.
Final Thoughts
Like other games from Sine Nomine, Wolves of God has a very fast Character Creation system. Not only is it fast, but its quite fun as well. The combination of random rolls to help your character come to life, combined with various choices (such as increasing an attribute to 14) is a wonderful way to get the best of both options. Fun, quick, yes still containing meaningful decisions. All in all, a top notch system.
Here's the final sheet. I couldn't find an "official" sheet, so I used a fan made one. 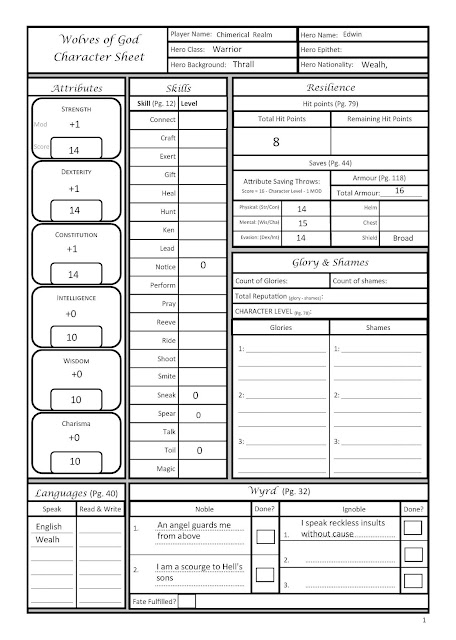 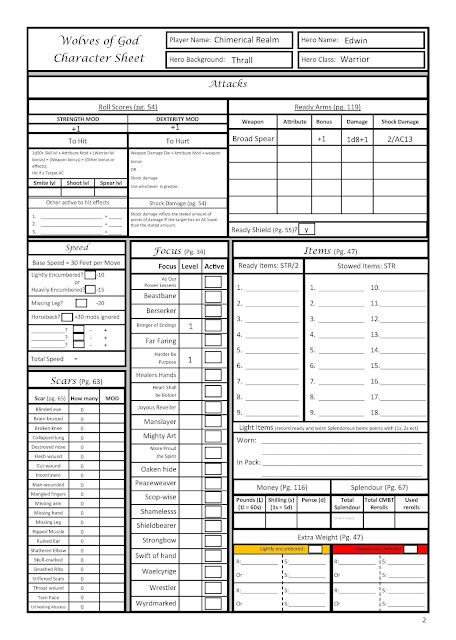