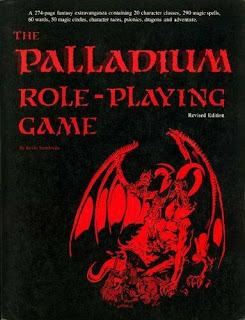 For Day 3 of the New Year, New Character challenge, I roll up Palladium Fantasy. This is a pretty obscure game these days. As far as I am aware, it's origins lay back in the early '80's, as a series of house rules for a game of Dungeons and Dragons. Eventually, the house rules so changed the game as to become something different. While it has its adherents, Fantasy was never that popular, at least among my small group of gamers. Its system, though, spawned several successor games--Teenage Mutant Ninja Turtles & Other Strangeness and Robotech were probably the first batch to gain wide popularity. But, if it is know today, it is probably from the game Rifts, which was immensely popular back in the '90's. Still, Fantasy has its own, unique charms.

Overview
Fantasy has the classic fantasy races--Humans, Elves, Dwarves, etc--as well as a number of more unique ones like Changelings (shape changers) and Wolfen (wolf-like humaniods). There are also a number of classes covering a variety of types--Mercenary, Paladins, devil worshipping Witches, Shamans, or even regular folks like Peasants or Merchants. Combat is d20 based, but is an active challenge. The attacker rolls to strike, and the defender rolls to defend themselves. This results in a number of bonuses and modifiers to various aspects of battle. There is also a separate skill system, which is based on percentiles.
I own both the 1st and 2nd Editions of the game, and for this Challenge I will be creating a character using the 1st Ed rules. I've always been rather fond of that edition, but have never had a chance to run or play in it. Nor have I made a character before, so it will be something new.
Step 1 Attributes & Background
Palladium has 8 Attributes for a character, and these are generally decided with 3d6 per attributes. You generally need a 16 or higher for any sort of bonus, but if you roll a 17 or higher, you get to roll an additional d6, allowing for a possible maximum of 24. This is, naturally, extremely unlikely. I am quite sure that it will come as little to surprise the amazing number of PC's I've seen throughout the years who manage to accomplish this feat.  The 3d6 base, though, is just for human characters. Different races roll different amounts--such as Goblins would roll 4d6 for P.P., but only 2d6 for I.Q. For this character, I'm going to stick with a human--3d6 across the board. Here's what I roll:

My character's starting Hit Points (how much damage they can take) is equal to their Physical Endurance plus 1d6. So, I start with 10 + 1 for 11 Hit Points.
Next up is a variety of tables to determine some more about the character. Here's the results:
Birth Order: 40 -- Second Born
Weight: 38 -- Average
Age: 35 -- 22
Social Background: 66  -- Clergy (Bonus: Medical (+3%), Demon and devil lore (+5%), Religious doctrine (+5%))
Disposition: 94 --  Easy going, laid back, trusts almost everyone
Hostilities: 58 -- Clergy
Origin:35 -- Eastern Territory
So, this gave me a bit of an interesting background. The "Eastern Territory" is the wild "frontier" land in the world, full of new and petty kingdoms. Pretty much the classic adventuring locale. The characters background as being from the clergy and yet being hostile to them gives me an interesting  hook. For now, I'm going to treat this as some "daddy issues."
Step 2 Alignments
Next up, we need to pick an Alignment. Unlike D&D, there's no "neutral" alignment--there's Good, Evil, and Selfish. Given the "easy going/laid back" disposition I rolled, and no other particular choice, I decide on Scrupulous. It's not the rigid principle of of Principled, but a more good character with "a high regard for life and freedom."
Step 3 Occupational Character Class 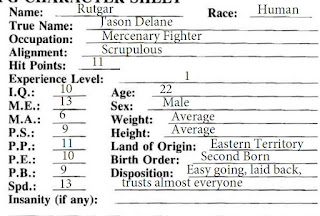 Now, I need to pick the class for my character. Each class has various requirements, based on attributes. For example, I can not pick to be a Long Bowman, as my characters P.P. of 11 is below that classes requirement of 12. Since previous characters I've created have been a sickly gambler and a social mind wizard, I want to create a warrior type. Pretty much only option given my attributes is a Mercenary Fighter, which only requires a P.S. of 7.

I also decide to make this character male, and give him the name of "Rutgar." The sheet has room for a True Name. I decide that J'ason Delane is the name his hated father saddled him with, but Rutgar is what he goes by.  To the left is the current character sheet.

Being a Mercenary Fighter, I start off with a basic set of clothes, a large sack, a small sack, one low-quality weapon and 120 gold to spend later on gear.
O.C.C. and Skill
Each character class provides a variety of skills. As a Mercenary Fighter, I always start with Hand to Hand (mercenary), Weapon Proficiency (W.P.) small shield, and Scale Walls (+10%).   Scale Walls begins at 26%, but I get that 10% bonus, so Rutgar has it at 36%. His weapon proficiency with shields gives him a +1 to parry with a shield. His Hand to Hand (mercenary) gives him a +1 damage bonus to all attacks.

I then move on to Elective Skills. These are a bunch of skills that tie to your class, but you have a bit more freedom with them. Based on my class, I can choose 6. I grab Prowl, Horsemanship (general), Medical, and three W.P.'s--Short Sword, Large Swords, and Short Bow.  I make a note of my bonus to Medical from my clerical background.
Next, I need to pick 8 Secondary Skills. There are general "other" skills that you can pick from anything. I go ahead and grab Demon and Devil Lore and Religious Doctrine (from my background). I also grab Swim, Sense Direction, and Speak Other Languages (Goblin). I only have three left, which I spend on some more weapon skills--W.P. Blunt, W.P. Spears/Forks, and W.P. Crossbow.
Equipment
I got some gear automatically to start out with, one of which was a free low quality weapon. I decide to grab a crossbow for my free weapon, since those are pretty expensive. I have a 120 gold to spend, and I drop 75 of it on Soft Leather armor. It's the best I can afford, and with only 11 Hit Points, I need to be careful. I only have 45 left after getting my armor, and so I spend 40 of that on a Broad Sword. I keep the 5 for in game purchases.

And with that, Rutgar is ready for his first adventure! 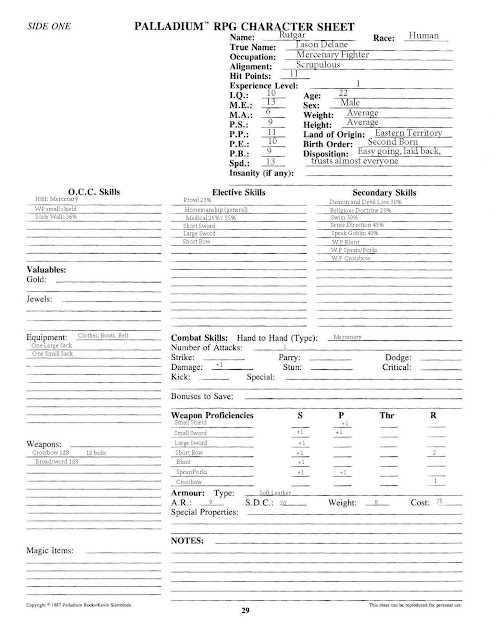