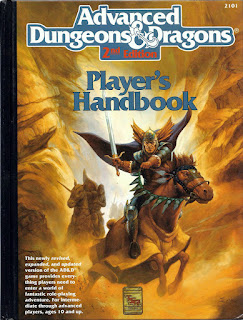 I'm pretty sure that the 2nd Edition of AD&D was the first RPG I ever played, and was probably the default game in my life for more than any other. In fact, I'm pretty sure it was the longest lived of any given edition of Dungeons & Dragons. Despite that, it appears to be something of forgotten beast these days. The first edition and the various permutations of "basic" get much more attention in the "OSR" community, while 2nd Ed is often barely remembered. Still, it had some wonderful settings and supplements, and fired up my imagination for years.

Having said that, this is still going to be a bit of a learning experience for me. There were a ton of supplements over the years, and I don't think I've ever created a proper "by the book" character in all that time. Elven Fighter/Mage "Bladesingers," Orcish dark clerics, "Ratcatcher" dwarves--sure, all of these were played, and played heavily. But all of them were made with supplements, and add ons, and Dragon articles, and not a small number of DM houserules and handwaving to make it all work. For this, I want to do it as by the book as possible.

But, options are part of what makes 2nd Ed so much fun. And "options" are something I've been avoiding so far. So, for this take, I want to make a non-human, non "normal" type character. Since I'm limiting myself to the core book only, this leaves me doing something with a Elves, Dwarf, Gnome, or Halfling. I have never made a Gnome or a Halfling, and so I'm going to pick one of those two.  And with that, let's get started!

AD&D keeps the classic six abilities (or "attributes" for other games)--Strength, Dexterity, Stamina, Intelligence, Wisdom, and Charisma. There are 6 provided ways to generate abilities; for this Challenge, I will be using Method II--roll 3d6 twice and pick the best for each ability. Here are the results:

The abilities are decent, but far from amazing. I would really like to try and make a gnome illusionist, but that class requires a Dexterity score of 16, and I'm pretty far from that with a 12. So, instead I'll go with a Halfling and make a Fighter/Thief.  I decide to make this character a male, and go to a Random Hobbit Name Generator to get a name of Gilbert Greenhill.
As a Halfling, Gilbert suffers a -1 to his Strength (dropping it to 13) and gets a +1 to his Dexterity (bringing it up to 13). They get a saving throw bonus to Saves vs. Poisons and Wands based on their Constitution, a +1 to attack rolls with slings and thrown weapons, as well as a bonus to Surprise.  He also has a 15% to have normal infravision--I roll and get a 59. Since that failed, he now has a 25% for partial infravision--I roll and get a 52.  No special vision for Gilbert. Now, I actually add the modified attributes and notes to the character sheet.

As you can see, despite the fairly solid attributes, they provide little in the way of any actual bonuses or modifiers. The 15 Wisdom is Gilberts strongest stat, though, so I start rethinking what I want from him. Rather than a Fighter/Thief, I think I'm going to go with a Cleric for this character. I'd love to make a multiclass character, but Halflings can not multiclass as a Cleric. So, single class it is. On the plus side, with the 15 Wisdom, Gilbert will have 2 bonus 1st level spells, and so be able to cast 3 spells per day, rather than the default 1.
There's a chart for height, weight, and age. Halflings begin at 32 inches +2d8 (3 and 6) for 41 inches, or 3' 4".  His weight is 52 pound plus 5d4 (4, 4, 1, 1, and 2) for 64 pounds. His age is 20+3d4, for a total of 27.
Step 2 Class
Now that I know what Class Gilbert will be, I flip to the Priest section, and look up "Cleric"--the default Priest class in AD&D 2nd Ed.  As a Priest, he has a hit die of D8, which gives him a 5 Hit Points. He can wear any sort of armor, but is restricted to blunt and bludgeoning weapons. He gains spells from his Deity, and can pick any spell he would like. Thanks to his Wisdom score, he can prepare and cast 3 spells per day.

Clerics in the 2nd Ed Core Book are pretty "generic" with little mention of specific deities or the like. Though, later, there are notes and rules for Priests of Specific Mythoi. This was greatly expanded with the Complete Priest's Handbook, but I'll embrace this for Gilbert. Rather than being a priest of a specific deity, I decide that he will be a priest of the "halfling pantheon"--something of a community priest who honors the various gods and spirits as the calendar and needs of the people dictate.  As a cleric, he also gains the power to Turn Undead.

Step 3: Alignment
AD&D 2nd keeps the classic Good/Neutral/Evil and Lawful/Neutral/Chaotic axis. As a cleric of an entire Pantheon, I decide that he will be Neutral, but still a fairly positive and well-intentioned individual. Neutral Good he is.
Step 4: Proficiencies

Any sort of "skill" system is optional in 2nd Ed, and there are two options provided. I decide to go with the more robust "Proficiency" option. For this, skills are divided into 2 categories--Non-Weapon Proficiencies and Weapon Prophecies.  I'll start with the non-weapon (NWP) first. As a Priest, he begins with 4 NWP's. His Intelligence of 13 gives him 3 languages. With the Proficiency system in place, these become 3 additional NWP's, for a total of 7. NWP's are divided into various categories. He can pick any General or Priest proficiency at cost. If choosing a Rogue, Warrior, or Wizard proficiency he would have to spend an additional NWP.

I grab Religion, Reading/Writing, Local History and Ancient History from the Priest Group, and Agriculture from the General. I then spend the remaining two on Modern Languages, picking up Elven and Common--he already knows Halfling.
Each NWP is tied to a specific ability, with a modifier. For example, Agriculture is tied to Intelligence with a modifier of 0. So, Gilbert has that at 13. Ancient History is also tied to Intelligence, but with a modifier of -1; Gilbert has that at 12.
I also need to Weapon Proficiencies for Gilbert. As a Cleric, his weapons are already limited to blunt type weapons and he only gets to have two.  Given his NWP's, particularly Agriculture, I decide to go with Footman's Flail and Sling, as both of these seem like weapons derived from farming implements, and he'll get his +1 Halfling bonus to his Sling. He can use other weapons in a pinch, such as a spear, but will suffer a -3 to his attack rolls.
Step 5: Equipment
As a Priest, Gilbert begins with 3d6 X 10 gp worth of equipment, but can only keep 2 or 3 for adventuring purposes--the equipment is provided by his faith, after all, and is not meant for his personal enrichment. I roll and get 6, 2, and 1 for a total 90 gp. I first purchase some basic clothing (Boots, Breeches, Cap, etc.) for a total of 4 gp and 5 silver. I also purchase a Footman's Flail for 15 gp and a Sling for 5 cp. While Gilbert can wear any sort of armor, that doesn't mean he can afford it. I'm stuck having to purchase Studded Leather (for 20 gp), rather than the Chain Mail I'd prefer (but it has a cost of 75). I do also grab a small shield for 3 gp. I have 33 gp and 5 sp left to spend. The Studded Leather gives Gilbert at Armor Class of 7, and the Shield increases it by 1, to a total of 6.

I use the remaining funds to pick up some basic adventuring gear--backpack, torches, rations, etc. After all that, I have 37 gold and 5 copper left. Due to being a Priest, however, this drops to 3 gp and 5 cp.  All I need to do now is pick his starting spells. As a Cleric, he can know any of the 1st level Priest spells. I grab Animal Friendship, Cure Light Wounds, and Magical Stones.

Here is the final character sheet: 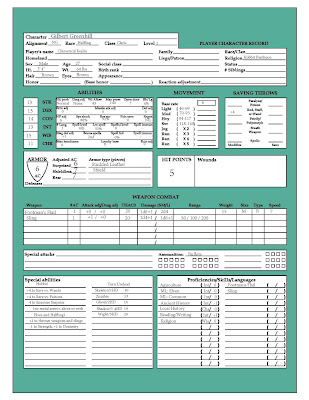 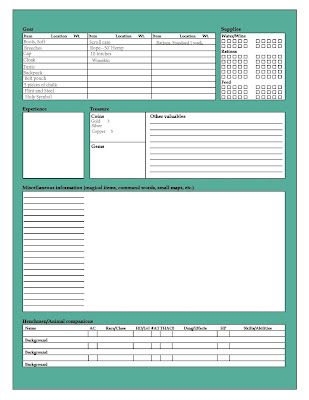 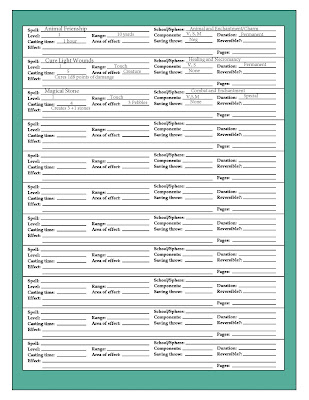