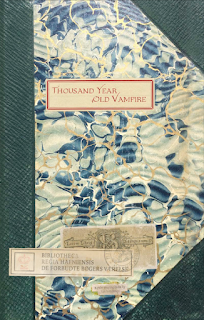 Thousand Year Old Vampire (TYOV) is a different kind of game than any of the others I've done so far for this Challenge.  It's not a traditional table top roleplaying game, but rather a solo journaling one. It's an intensely personal game of memory and loss, seen through the eyes of an immortal vampire as they navigate the long centuries. I've played a few games of TYOV, and I have to admit that the game affects me in ways that few other RPGs can hope to match. I'm actually rather annoyed and frustrated that I never conceived of this idea, but I still have nothing but great admiration for Tim Hutchings and what he managed to accomplish.

Given it's unusual nature, character creation is similarly unique. There's no list of skills or abilities, and there's no way to "optimize" a character or worry about making the wrong decision. This is the story of your character, however you conceive them and whatever they might be capable of. Any "victory," though, is likely to come at a high price, and even the clearest will be bittersweet at best. For the key to the game is identity and memory, and how time dulls even the most intense of experiences, and how things that once meant so much to you can fade away and ultimately be forgotten.

The "game" element of TYOV is a resource management one. At each stage in your thousand year life, you will be faced with various challenges. You overcome them by either "spending" skills or resources, though you might gain new ones as time goes by. Each of these "experiences" end up forming memories. But while your body may be eternal, your mind is still mortal, and can only retain so much memory and knowledge. As you experience more and more, other, older memories gradually fade. The only way to protect these is by creating a Diary, a physical item to record your past. But such memories are distant, and you might not even recognize the person who wrote the diary after a few centuries. Worse, such Diaries are physical, and thus subject to loss or destruction. At the end, you may find yourself slain by an ancient foe with no memory of why you two so hated each other. Worse, they killed you with your own spear, an ancient weapon you dragged around through eternity, having long forgotten not only how you got the thing, but your fathers face as he tearfully passed it to you to defend your family from...someone.

The first thing I need to come up with is the basic concept for this character. TYOV allows for any character of any era. Despite it's name, you don't have to start 1,000 years ago. You can begin in ancient Mesopotamia or in Colonial America, or even in the modern day and plan on writing a "future history" for the character. As I was writing this, the "Colonial America" struck a chord with me. I've long been a fan of colonial history, and have never had a chance to play an RPG in that era. I decide to go with a Dutch colonist in New Netherlands. I figure the starting date will be 1660, just a few years prior to the English takeover. I decide to make this character a man, and flip open Everyone, Everywhere. I flip to the Dutch section and get a 15 and a 13, which gives me a name of Coenraad de Groot.

Given how much of later creation will be based on decisions, I also open the Universal NPC Emulator to help me come up with a concept. I first roll for "Modifier" and "Noun"--I roll an 81 and a 28 for a Jovial Pioneer. Which fits, so far. I also need to roll a "Motivation Verb" and "Motivation Noun"--I get 33 and 34 for Hinder Friends. This is a bit of an odd combination, so I decide that Coenraad is a very friendly and gregarious type, but also one that kind of drags people down. He wants to work as little as possible, and drink and socialize with his friends. If you spend time with him, you'll have a good time, but you won't really accomplish anything. He's a nice guy, but a bad influence.

I now start an Experience with this information:

Step 2: Mortals
Next, you need to come up with 3 morals that are important to your character. They may not be around for long (they are, after all, mortals), but their existence and your relationship to them defines who your character is. While I'm sure dear Coenraad has friends and family back home, I'm going to keep these characters local to the colony.  I could use UNE to generate these, but I have a few in mind. All names, though, are from the Everyone, Everywhere List. 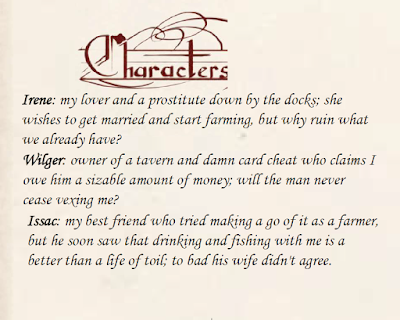 Step 3: Skills and Resources
Each character begins play with three Skills and Resources. From a game play point of view, it doesn't matter how significant or "powerful" these are, they are used the same. One character might have a rusty knife, another an entire Roman Legion--from a game standpoint, they are equally useful for extracting yourself from the wrath of hunters.  Given Cooenraad's concept and location, he won't have many "powerful" Resources or Skills, but what he does will mean a lot to him.

Step 4: Experiences
Now, I need to combine all these things into Experiences and Memories--after all, things only have value in this game in terms of what they mean to your character. I need to come up with three Experiences, and each of which will be a separate memory. Each should combine two traits.
I know have four memories:

Step 5: The Gift
Finally, I need to create the creature that "gifted" Coenraad with his immortality, as well as the Mark that separates him from the mortals around him.  I don't imagine a focused personal connection between the two--in fact, I see it as something seemingly random, at least from Coenraad's point of view. He was attacked while out on his boat one night by some sea creature. He washed up the following evening on the shore of Lange Island.  I popped over to Wikipedia and did a quick skim of the "Folklore of the Low Countries" and decide that he calls the creature that changed him Mara. His Mark is bulbous eyes--wonderful to see in the dark and in the water, but distinctly odd and unsettling for mortals to see.
And with that, Coenraad's story is ready to be told.
Final Thoughts
It's difficult to compare Thousand Year Old Vampire's character creation to the others I've done so far. The purpose is just so different--with the intent of creating a very narrow and personal story of regret and loss, rather than the typical group focus adventure and action. Not that it is all that different from the type of character creation you might see in a Fate style game or the like. Still, it is amazing how, with just a few simple prompts, a character I'm already rather fond of can be created. Even if I am also very worried about where his story will take him. 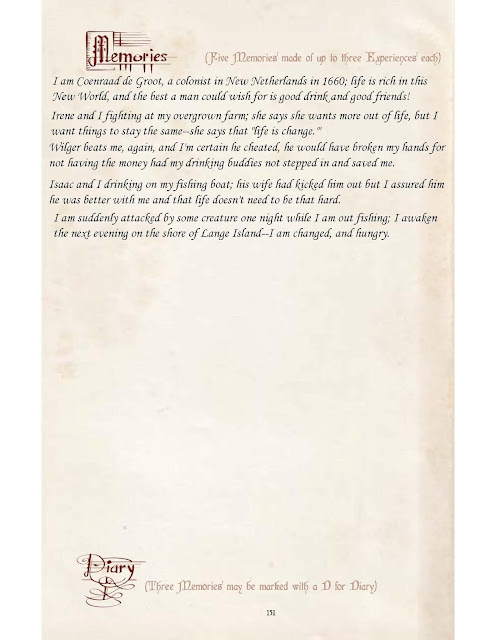