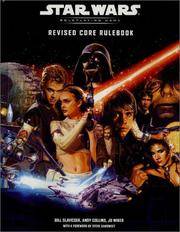 During the D20 boom in the early 2000's, Wizards of the Coast landed the rights to the Star Wars RPG. I wasn't terribly aware of what had happened with West End Games, or why Wizards got this license. All that mattered was that, since my group at the time was enamored with the then new D20-system, I could actually play some Star Wars, rather than having to cajole folks into letting me run a game.

I'm not sure how well D20 actually served Star Wars. On the surface, it seems like a natural fit. Star Wars was always more "fantasy in space" than "science-fiction" and D20 was built for Dungeons & Dragons and fantasy adventures. But it could also get bogged down in minutiae--do we really care about five-foot steps in a running blaster fight to escape the villains lair? That's not to say it wasn't a good game. In fact, it was fun as hell. Some of the tweaks they made to the rules really helped to keep the drama and danger present in the game, and I even find myself guilty of comparing this to Starfinder, often to the latter's detriment.

While the West End and Fantasy Flight version of Star Wars focused on the classic era of the Original Trilogy, the Wizards version came out roughly the same time as the Prequel's, and so the focus is different. While there is some support for the various Era's, the game defaults to being in the "Rise of the Empire," when the Republic was still the dominant force in the Galaxy. Other than that, the classic tropes are all present--Jedi, smugglers, wookies, beaten up space ships, nobles, fast travel to distant and exotic worlds, the whole thing.

Befitting its D&D origins, Star Wars (D20) has the classic 6 Abilities--Strength, Dexterity, Constitution, Intelligence, Wisdom, and Charisma. It also has a number of Classes that determine your niche in the game--wily Scoundrel, tough Soldier, wise Jedi, etc. The Classes define not only what Skills the character is naturally good at, but each also has unique features. For example, Scoundrels get Precise Attack where that they can increase the damage on certain attacks.  As befitting the name D20, pretty much everything is resolved through the roll of a twenty-sided die and adding modifiers from Abilities, Skills, and other bonuses.

The first step in creating a character in Star Wars is to determine Abilities. By default, these are determined by rolling 4d6 and dropping the lowest. However, you don't roll in order; instead players get to assign them to the Ability they wish. Which means choice does matter a great deal in Star Wars. Two ways to come up with a concept occur to me. The first is using my old standby of the Universal NPC Emulator, while the second is creating a version of the Moff Hunter I made for the WEG version. But, its Star Wars, and if I don't at some point get around to making a dang Jedi I feel like I would have failed my childhood self. So, Jedi it is.

There are two possible Jedi Classes, the Consular and the Guardian. I want to play one in the mold of Obi-Wan Kenobi, so I decide to go with Guardian.  I do a coin flip and figure out this character will be female.  Using donjon's Star Wars Name Generator, I get Nella Dara.

As per the standard rules for this series, I'm going with the random rolling of attributes. I need to roll 4d6 six times and drop the lowest, which will give me a value between 3 and 18.

A fairly middling set, but that 18 is wonderful. I'll actually assign these to the Abilities later.
Step 2--Species
There's a galaxy of possible Species in Star Wars, all of which provide some modification to the base character.  Most modify the Abilities and/or provide unique bonuses or penalties. I'd really love to play a non-Human, if only to increase some of her Abilities a bit. But, Humans get a bonus feat and extra skill points, something that's just too darn useful. Nella will be a Human.
Step 3--Class
Fortunately, I already choose this--Jedi Guardian
Step 4--Assign Abilites 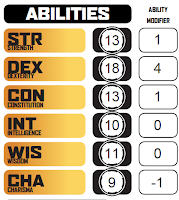 For Guardians, the game recommends Strength and Constitution be the highest, with Dexterity also being useful. Knowing a bit about the game already, I decide to flip this slightly, and put the 18 into Nella's Dexterity, with the 13's going to her Strength and Constitution. The 9 is an issue, as it will give her a -1 penalty to that Ability, and I decide to put it in her Charisma--she's had an isolated upbringing in the Temple, and isn't much of a people-person. This leaves her with average Intelligence and Wisdom. She's never going to be terribly proficient in either mundane or Force Skills.
Step 5--Species and Class Features
Now I make a note of what special Features she gets for being a Human and a Jedi Guardian. As a Human, she starts with the ability to Read and Write Basic, gets 4 extra skill points at 1st level (1 extra ever level after), as well as a Bonus Feat at 1st level.
As a Jedi Guardian, she starts with four Feats: Exotic Weapon Proficiency (Lightsaber), Force Sensitive, Weapon Group Proficiency (Blaster Pistols), and Weapon Group Proficiency (Simple Weapons). She also starts with Force Training, which allows me to pick either Alter, Control, or Sense as a bonus Force Feat, which will unlock various Force Skills/Powers. Eventually, she'll have access to all of them, but for 1st level I pick Alter, just to get access to the Move Object skill. Are you even a Jedi if you can't move things with your mind?
She also gets the Deflect (Defense) Feature, allowing her to attempt to parry blaster bolts with her lightstaber.
Step 6--Vitality & Wound Points
A character's ability to absorb damage is divided into two pools in this version of Star Wars. Vitality increases as one levels, and represents minor wounds, near misses, and the general "luck" that main characters tend to have in this world. As a Guardian, Nella gains 1d10 + Constitution modifier each level. At level 1, though, she automatically gets this at max value, so she has 11 Vitality Points.
Wound Points represent true, life threatening injuries.  These are only affected when a character has lost all their Vitality, or in the event of a Critical hit. Wound Points are equal to a characters Constitution score, so Nella has 13.
Step 7--Defense
A characters Defense has a base value of 10. You then add their Dexterity Modifier and Class Bonus.

Step 8--Other Aspects
This is where I make notes of other values for Nella. As a Human, her Move is equal to 10 meters. Her Initiative Modifier is equal to her Dexterity Modifier of +4. As a Jedi Guardian, she begins with a Base Attack Bonus and a Reputation Bonus of +1.  There are three Saving Throws in Star Wars, and each is tied to an Ability. she gains a base value due to her Class.

Finally, as a 1st Level character, she begins with 1 Force Point. Being Force Sensitive gives her an additional Force Point.
Step 9--Skills
As a Guardian, Nella begins with [4+Int Modifier] x 4 Skill Points, or 16. As a Human, she gets 4 more, bringing her total to 20. Skills are divided into Class Skills (with a maximum value of 4), and Cross-Class Skills (maximum value of 2, but they cost 2 Points for each Rank). Her Guardian Class Skills are Balance, Climb, Computer Use, Craft, Intimidate, Jump, Knowledge, Pilot, Profession, and Tumble.  The Force Feat of Alter gives her additional skills, such as Move Object, Force Strike, Force Grip, etc. In all she has roughly 18 Skills to assign points to.
I start with her Force Skills, places 4 Ranks in Move Object, 2 in Alter Mind, and 2 in Force Strike. I then focus the remaining 12 on her mundane skills. Piloting is pretty critical in Star Wars, so I spend 4 Points on that, leaving me with 8. I also spend 2 on Jedi Lore, Balance, and Tumble. I divide the last two into Intimidate and Climb.
Star Wars has a whole lot of Skills, and Nella is missing quite a few key ones. For example, Spot and Listen, which aren't even Class skills. Which makes sense. I know when I think of mystical Zen warrior monks, I think "someone who is completely oblivious to what is going on around them."
Step 10--Feats
Feats are the "something special" about a character, something they can do that most people can't. All characters begin with at least one, and Nella gets an extra one for being Human. I pick Weapon Finesse (Lightsaber), which will allow her to use her Dexterity Modifier rather than her Strength for figuring out her attacks, and Starship Operations (spacefighter) allowing her to fly and fight in a fighter without penalty.
Step 11--Starting Equipment and Gear
As a Guardian, Nella begins with a lightsaber and 1d4 x 250 Credits. I roll a 3 for 750 Credits.  I spend 500 on a Blaster Pistol, as having a ranged weapon of some sort is often key.  There's not much I can buy for 250 credits, so I grab her an All-Temperature Cloak for 100, and 5 Glow Rods for 10 each. She has 100 credits left for whatever mission the Council decides for her.
Step 12--Finalize the Character
This is where I determine all the little "other" details about the character--height, weight, eye color, etc.
And with that Nella is done.
Final Thoughts
It's difficult for me to fully judge making a character in this version of Star Wars. I've played the base system since it was released, and am still playing one of its variants now with Starfinder. So I have a certain amount of "system mastery." But playing it with novices has exposed to me its flaws, and going through the Generation "step by step" today has only heightened those flaws. There are a lot of decisions a player needs to make. While some may seem relatively minor, others can have repercussions throughout the game. For example, I knew the Weapon Finesse Feat existed, so I placed Nella's 18 in her Dexterity. But lightsabers are melee weapons, and Strength is key to those. Without that Feat, she would be ill-served with how I placed her Attributes.
Not only that, but "niche protection" is the name of the game here. Jedi, even Consulars, have very few skills and those few Skill Points are probably best spent on Force Skills, thus allowing the non-Jedi classes to shine in other areas. Creating a character as versatile as, say, Luke requires a degree of planning and care that few novices would be able to do.
While I've played quite a few d20 Star Wars games and enjoyed them, it's honestly my least favorite take on the movies.
Here's Nella's final sheet. 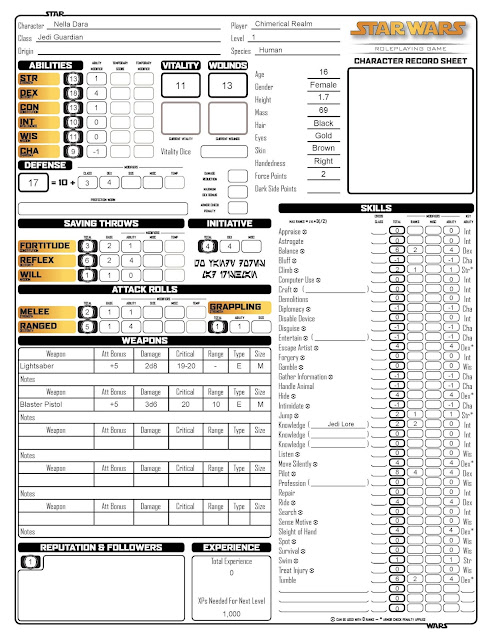 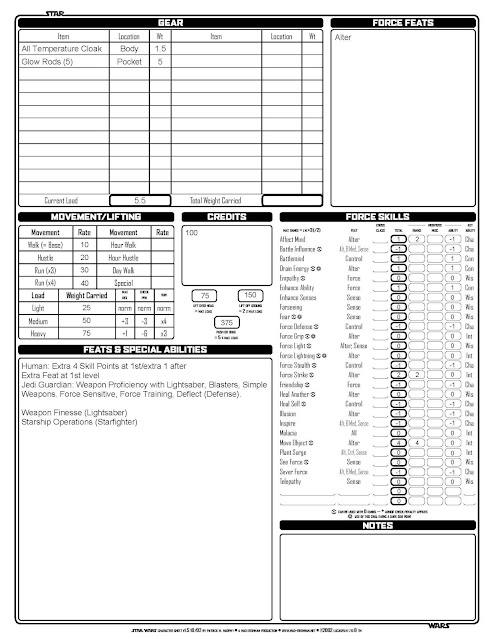