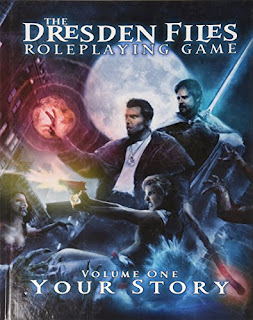 Oddly enough, I knew nothing of the Dresden File book series when I picked the game up--I just wanted a FATE game, and I believe this was the first "official" one of the then current rules set. FATE has since moved on to a new edition, and the latest version of the game, called Dresden Files Accelerated is out. But, I only have the old version, so that's the one I'll be going with.

I'm not going to lie--this is going to be a bit of a challenge. Not that Character Creation in Dresden Files is inherently more difficult than most of the games I've done so far in this series. It's that the game, and Character Creation itself, is explicitly meant to be collaborative. Sure, working with the Game Master is part of making any character. And it's always a good decision to talk certain things over with the other players. And other games include sections like "talk to the other players and figure out how you know each other." But Dresden Files takes these "best practices" to a whole other level, and then makes that level part of the core game.

Basically, you first work together to create a city--a town full of dangers and mysteries and stuff that at least some of the group finds interesting. As you go through the process, characters start to emerge. Most will always be NPC's, but perhaps one or two of the will be interesting enough to be adopted by a player. In any case, it's only after the group as a whole has created the setting that you move on to creating individual characters.

For individual characters, there are a couple of distinct steps, involving Power Level, Template, Concept, etc. Then you go into Phases, which will be tricky part. Part of creating a character is to link them with the others who will be playing, and I'm not sure how to handle that. I might use some Oracles to help figure that out, or just skip it. After that, you arrange your Skills (based on Power Level, Template, and Concept), and pick Stuns and Powers with what points you have remaining.

Given that the game is all about working with a group, this is going to be a terrible example of creating a character, as I'm going to be adding a whole lot of random elements that are antithetical to very nature of Dresden Files. But, if Harry Dresden can break all the rules for a good reason, then so can I.

You call this blog a 'good' reason?

Compared to an out of print RPG I'm never going to play otherwise? Yes.

There are four potential Power Levels in the game--Feet in the Water, Up to Your Waist, Chest Deep, and Submerged. Each gives the character more and greater Skills as well as Refresh, which they can use to buy special powers. Normally, this is set by the GM based on what the group already decide for their setting. Lacking a GM or a group setting, I just roll a 1d4 and get a 3 for Chest Deep which gives me 8 Refresh, 30 Skill Points, and a skill cap of Superb for my character.

While not as powerful as the titular character, this is still fairly robust, and all character Templates are available to me. I might not have a lot of points to customize them, but what's an RPG without a little challenge?

Now that I know how powerful this character could be, I need to start narrowing down on who this character is. So, I want to come up with a basic concept and name before going forward. Technically some of these steps would be taken later, but since I need to start making decisions, I need something to guide me. I open up the UNE and Everyone, Everywhere List and get:

Forthright Professor who wants to Discover the Forsaken.

A coin flip determines that this character will be a woman, and I roll her name on the "modern" lists to get Paige Severson.

I decide that Paige is an educated, scholarly type--possibly an actual Professor--with a focus on spirits and the undead. She's not a "necromancer" in that she tries to command them, but rather seeks to know more about them, communicate with them, and aid them in finding rest, if possible.

Paige could be a full on Wizard, but that doesn't quite feel right. I instead go with Focused Practitioner.  She can summon spirits and talk to them, but she's not running around lobbing Fireballs at folks. I note that Dresden Files apparently used ectomancer for this kind of wizard.

As a Focused Practitioner, I must take either Channeling (immediate spells) or Ritual (takes longer, but has a greater effect), each costs 2 of her Refresh. I decide to go with both. I also decide to take the Sight, which allows her to see the dead that walk among us. All of this costs her 5 Refresh.

I also note that Conviction, Discipline, and Lore are three key skills for her.

The High Concept sums up who the character is, and will serve as her initial Aspect (a key in game feature). It should be pretty simple, so I go with Scholarly Ectomancer.

The Trouble is another Aspect, but one that makes their life more difficult and challenging, but also something that motivates and drives her. This is a tricky one to come up with.  Should I focus on the disbelief she faces in mortal world? While certainly plausible, it doesn't seem very interesting. Should she be "haunted" as spirits seek her out? That's a bit more interesting, and could make her life more difficult.  Could there be a death or a loss that drives her to find the Forsaken?

I'll be honest, the obligation to come up with cool Aspects and even cooler names for them is one of the things that always scared me off from Fate games. I decide to go with Gravetouched to reflect both the restless dead seeking her out, as well as how distrusted she is by the living.

There are five sub-section to this Step, each describing the character history prior to the start of the game. Each will also give her an additional Aspect. The first two are the characters origins and then what shaped them.

The next three are "previous stories" that your character has appeared in. Phase three is the characters "debut" story, and the following two should feature other PC's in prominent starring rolls. Since I have no other PC's, I'm just going to do phase three, leaving four and five blank.

I have 30 points to buy Paige's Skills. Skills are rated on a "natural" scale, and each level has its own cost--Average (1pt), Fair (2pt), Good (3pt), Great (4pt), and Superb (5pt). However, you can't have any more skills of a given level than you have of the level below.

I started with 8 Refresh to buy Paige's powers, and spent 5 based on her Template, leaving me with 3.  I decide to just spend one on the "mortal stunt" of Capable Researcher, leaving her with 2. That Refresh of 2 will allow her to start with 2 Fate Points.

Step 8--Final Refresh Level and Stress
Paige has a Final Refresh Level of 2. Stress is how Dresden Files tracks "damage" and there are three tracks--Physical, Mental, and Social. Each starts with two boxes, and this is modified by certain Skills. Paige doesn't have Endurance, so her Physical remains at 2. She has Presence at Fair, so she gains +1 to Social Stress, or 3. She has Conviction at Great, so she gains +2 to Mental Stress, or 4.
Final Thoughts
I'm not sure I should have done Dresden Files. It's a game I've owned for a while and I wanted to make a character for it, but I think this format served the game poorly. What makes this style of Character Generation special is the collaborative element, and that's something I was unable to replicate here. So much of the character comes about by bouncing ideas off of each other, rather than deciding things in a vacuum.
Looking at it as objectively as possible, it does accomplish what it sets out to, which is to create a character like what you would read in a series of pulpy urban fantasy novels. The rules and mechanics are far more complicated than I recall them being, and I don't think I would call the game "rules light;" which was something that first drew me towards Fate. The experience as I went through it wasn't terribly enjoyable or interesting, but, again, that's because I did it "wrong."
I'd still love to try the game at least once.
Here's Paige's final sheet: 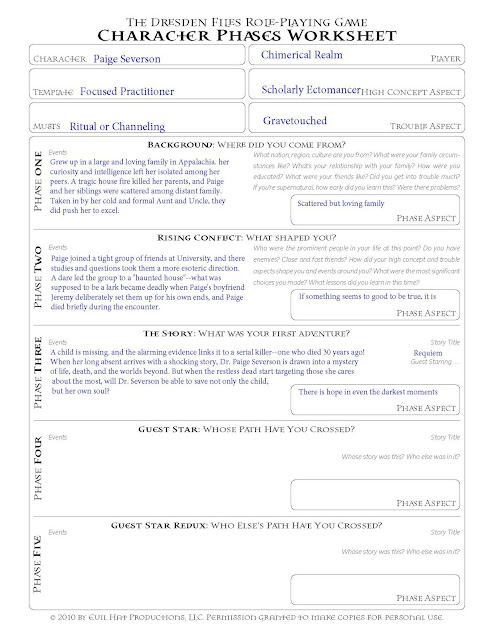 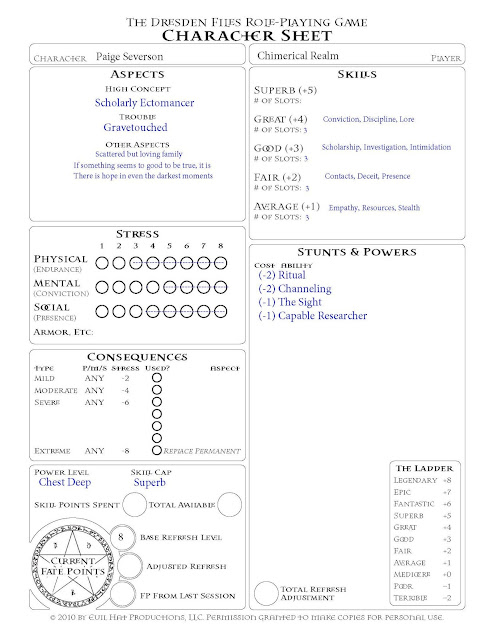