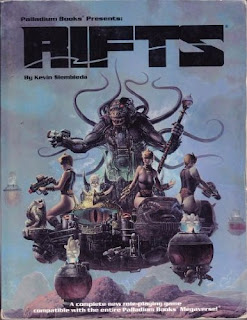 Rifts is the "masterpiece" of Palladium books, the culmination of their "Megaversal System" bringing together everything into one a post-apocalyptic world of future Earth. There's been quite a few Palladium games so far in this series--Fantasy, Heroes Unlimited, and Teenage Mutant Ninja Turtles.  Rifts just takes everything we've already seen and cranks it all up to 11.

At it's most basic level, the system is what we've seen before. 8 Attributes that are often (but not always) on a 3-18 scale. Combat is D20 plus modifiers. Skills are percentile. The only new "core" rule is the addition of Mega-Damage. Previous games had Structural Damage Capacity (S.D.C.), which was either like Hit Point (but not as serious) or given to inanimate objects like cars and doors. Rifts brings in Mega-Damage Capacity, which is SDC, but more so. They are related on a 1:100 ratio, where 1 point of Mega-Damage does 100 points to SDC/HP. So, a weak laser pistol doing 1d6 damage is going to not only cut a man in half, but shoot through the house, through the car and through a half dozen trees.

It's ridiculous. The whole damn game is ridiculous. The base rules are ridiculous and then almost every single Character Class has its own unique rules or some tweak that is at odds with everything else. And none of this is remotely balanced against each other. Even in the base game, the Combat Cyborg is a walking tank with hundred of MD carrying an arsenal that can, literally, level a small city while his party member might be a Rogue Scholar who is, like, really well educated.

A player rolls dice for their 8 Attributes. These are generally rolled with a 3d6 (adding a bonus die if you roll 16 or higher), but different Species or Races roll different amounts. Then you pick your Occupational Character Class or Racial Character Class, note down the default Skills for the class and choose the "optional" and "secondary" Skills, figure out all the modifiers to Saves and Combat, then pick equipment--though most Classes come with a default amount.

It's not that complicated, except almost every single Class has some sort of quirk or modifier or something different about them. Some are easy to adjust to, while others can drag you into complicated math and subsystems. Also, particularly in comparison to other Palladium systems, it is not a "random" system. There's too much choice and to many decisions to rely on charts. So, like all games that are choice heavy, I want to start with figuring out a Concept.

Normally at this point I would roll on the Universal NPC Emulator and use the results to formulate a Concept. I would then try to pick a Class that best fits that Concept and proceed from there. I like a bit of randomness in Character Creation, and this not only scratches that itch, but also help me with a bit of creativity when I'm lacking.

I'm not going to do that this time. This time it's Rifts, and there's a character I've never made that might only work in Rifts.

Well, technically, I'm playing a Dragon Hatchling R.C.C. (Racial Character Class). Other books allow for thousand year old behemoths, but for this character we're going with a newborn dragon, making him only "pretty powerful" rather than "game destroying thing that can square off against deities." RCC's are inherently different than other Classes, and are meant to reflect those archetypes that just don't fit in with anything else. Dragons, yes, but also Vampires are RCC's. So are, oddly, psychic humans.

Dragons have the same 8 Attributes as anyone else, but roll a different set of dice. I think I'll go with a Fire Dragon Hatching.

As a supernatural creature, dragons don't have normal Hit Points or SDC. Instead, they are natively Mega Damage, and begin with 1d4 x 100 MDC. I roll a 4, and so this character starts with 400 MDC.

Most of what makes a dragon special are innate to them. I make a note of all of these. 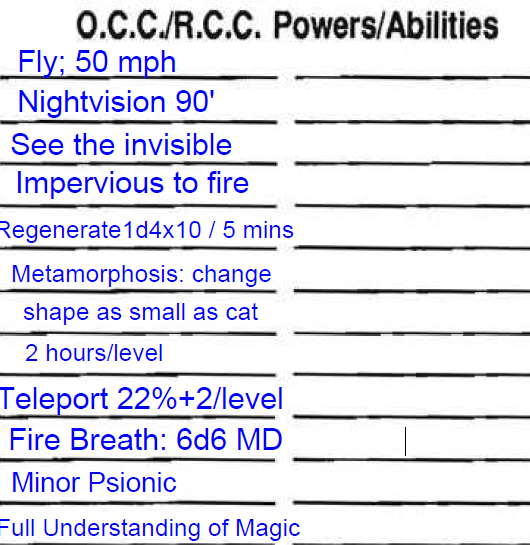 Step 4--Psionics
Dragons have natural psychic powers, and Hatchlings are considered Minor Psionics. As such, they start with with 1d6 x 10 (50) Inner Strength Points (ISP). They can also pick 6 Psychic Powers from either Sensitive, Healing, or Physical. I pick:
He can also start learning to cast spells at level 3, but starts with just knowledge of magic, not actually being able to cast any.
Step 5--Skills
Dragons begin fully literate in Dragonese and have full knowledge of Basic Mathematics. They also speak another language, and I pick American as it's the most common language in North America (the default setting for Rifts). Dragons also know 6 additional skills. I decide to still with more basic, naturalistic ones and get: Sing, Wilderness Survival, Prowl, Detect Ambush, First Aid, and Hunting.
Step 6--Final Details
There's a few more things to work out. Like, how old is this hatchling? I roll a percentile and get a 20, which means he is 1d6 days old--or 1 day old. Which I am certain makes this the youngest character in the series. I also need to pick his Alignment. As a newborn, I decide to go Neutral--Unprincipled. He's good, but young and self-indulgent. Dragons don't start with any equipment, so I skip that step.
And that's it. I give him the name of Nondyr, and he's ready to play.
Final Thoughts
Character Creation in Rifts is, well, much like Rifts itself. It's not as complicated as it seems, and once you play around with it, it can be quite fast. Granted, a Dragon Hatchling is one of the simplest character to make, but even something like a Ley-Line Walker (Wizard) or a Cyborg aren't significantly more complicated.
The issue is how the game is laid out. It's a bit of a confusing mess, and trying to make everything fit together and understanding where in the book everything is can be quite complicated. And the sheer variety of options can be completely overwhelming.

But, you know, one of those base options is to play a dragon, so I can forgive a lot.
Here's Nondyr's sheet. And with that, the 31st character is completed. 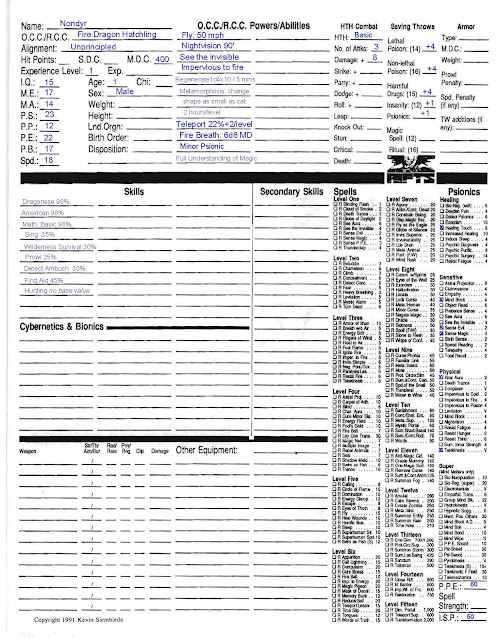